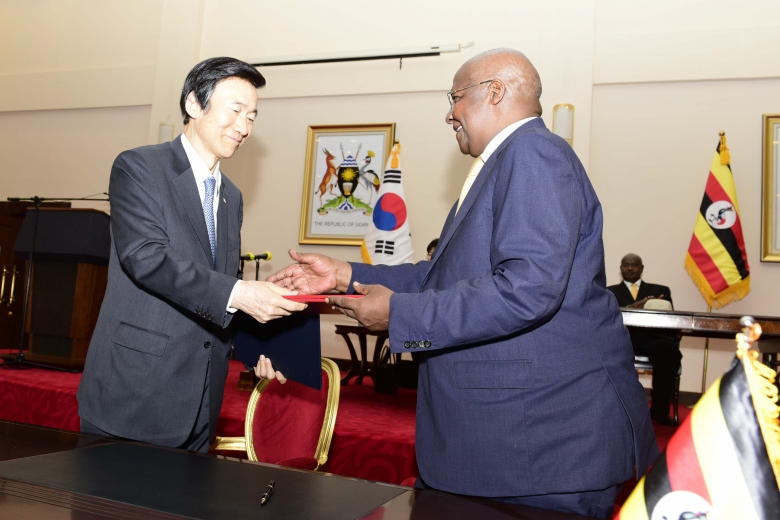 Uganda and South Korea have agreed to bolster their bilateral relations in 10 key areas after both countries signed memoranda of understanding today at State House, Entebbe.

The agreements were signed by different Ministers of the two countries at a ceremony where President Yoweri Museveni hosted his visiting South Korean counterpart, Park Geun-Hye. The South Korean leader arrived in Uganda yesterday on a 3-day State visit at the invitation of President Museveni

Prior to signing the memoranda, President Museveni officially welcomed Ms. Park Guen-Hye on her first State visit to Uganda. Upon her arrival at State House Entebbe at 10.00 a.m. President Park Guen-Hye received a bouquet of flowers from five year-old Meghan Makanga before shaking hands with President Museveni. She then inspected a guard of honour mounted by the Officers and men of the Uganda’s People Defense Forces (UPDF). She also received a 21-gun salute.

In a meeting with his guest President Museveni, the two leaders outlined four major areas that the two countries can partner on. These, he said, are investment, trade access, tourism and human resource development

With Uganda’s abundant natural resources, President Museveni noted that Korea could establish processing industries in Uganda which would not only create jobs but also add value to exports hence fetch higher returns.

“One of the problems of African countries is not having enough entrepreneurs. We have some entrepreneurs but the spectrum is very big and they are few. They are now busy in trade, real estate but few in manufacturing. That is why we need help from South Korea,” said Mr. Museveni.

He pointed out that the government had found investors for milk products, which was now doing well, adding that other products like coffee and fruits could also benefit from a similar intervention.

The President also encouraged the Korean Government to support some of its companies that are investing in the oil refinery in Hoima district. He added that if they did so, they would indirectly support scientific innovations and research for African products.

“Makerere University has innovations that need funding. Normally, our Government funds; but we have other priorities and so oil will help these innovations,” said the President.

About trade access, the President encouraged Korea to create market for Uganda by buying locally made products from Uganda.

On tourism, President Museveni observed that it would be a less costly venture that would allow the two countries achieve a balance of trade if more Korean tourists came to Uganda. The Korean Government, said Mr. Museveni, could also support human resource development through the technical field in Uganda.

“We have over 100 technical institutions. We have a deficit of 190. You should come in and see how you can support us,” said the President.

President Park Geun-hye agreed with President Museveni about Uganda being gifted with natural resources, noting that her country would partner in agricultural production, textile and other businesses as long as the Ugandan Government introduces relevant business policies to attract Korean investors.

She further expressed her country’s interest in sharing their technology expertise, especially in digital broadcasting which would reduce the information gap.

President Museveni was impressed with the suggestion and encouraged Korean companies to come in and assemble computers, TV, and radios that will in the end help Ugandans acquire skills and training in the area of I.T. and scientific cooperation.

He also promised to send Uganda Tourism Board on a marketing mission to Korea after Korean President Park Geun-hye advised that Uganda markets itself in the Asian nation.

Ms. Geun Hye was also impressed by the fact that Makerere University was promoting the Korean culture by teaching the Korean language as it was one of the ways that would create close ties with the host country. She further stated that she hoped there would be cooperation between the two countries in terms of defense to which President Museveni agreed, saying that the country was ready to cooperate with them in that area.

The Korean President also thanked President Museveni for having signed the UN Resolution 2270 barring North Korea from developing nuclear weapons. President Museveni expressed hope that the Korean peninsula, which was divided after the Second World War, would re-unite.

Mr. Museveni and the First Lady, Janet Museveni, later hosted their guests to a state luncheon.