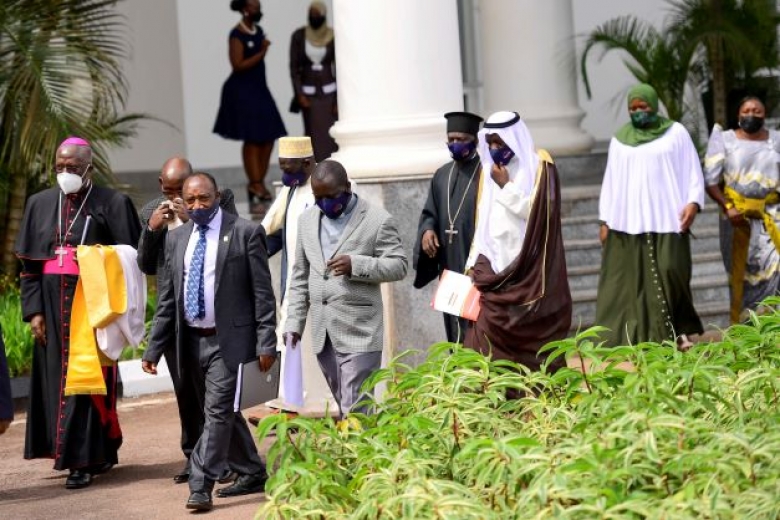 President Yoweri Museveni has urged religious leaders to teach their followers to adopt a culture of praying and doing, which has enabled the government to defeat various challenges experienced in the year 2021.

The President made the appeal during the annual thanksgiving service which he hosted together with the First Lady and Minister for Education and Sports, Maama Janet Kataha Museveni at State House, Entebbe.

Recounting the various challenges, the president said it was the Lord that enabled the country to defeat them.

"Locusts (enzige) invaded us but we finished them without eating people's crops, the landslides in Kasese, the lakes chased some people who had invaded the lake, Covid-19, cattle rustlers in Karamoja, the Bijjambiya in Masaka, bomb blasts in Kampala- they were supposed to be more but ended to be five- elections, terrorists, there were also the floating Islands which were going to destroy the dams and we removed them and rising water levels which came at almost the same time. The Lord enabled us to defeat them," Museveni said. He thanked God for enabling Uganda to overcome the challenges.

On the issue of livelihood and health, the President advised Ugandans to speak the same language in order to address the issues, noting that "many tongues spoil the growth," a recreation of the famous English adage “Many cooks spoil the broth.”
Museveni explained that the National Resistance Movement (NRM) addressed these issues long ago and in writing. Some people listened and cited an example of a group in Kabarole led by Nyakana which listened to NRM. He explained that the group had nothing but began commercial agriculture on one acre of land and now they are earning Shs240m (equivalent to $66000 per year) and therefore urged other Ugandans to copy them so as to uplift their standards of living.

During the thanksgiving, the First Lady, Maama Janet Museveni asked God to protect Uganda during this festive season and after crossing into the New Year 2022.

"As we cross into the New Year, Oh Lord, help us to possess our land as a nation, give us more blessings and new opportunities. Please, God, give us the ability, the might, grace and anointing to possess our promised land in every sector of our society. When we are weak help us to be strong," she prayed.

The service was led by Pr. Dr. Daniel Matte, President Seventh-day Adventist Uganda Union. His co-celebrants were His Grace, Rev. Dr. Samuel Kaziimba Mugalu, Archbishop, Church of the Province of Uganda; His Eminence Sheikh Abdallah Ssemambo, Apostle Dr. Joseph Serwadda, President Apostle Born Again Faith in Uganda; Bishop Joshua Lwere, General Overseer National Alliance of Pentecostal and Evangelical Churches in Uganda and a guest preacher, Rt. Rev. Dr. Joseph Antony Zziwa, Chairman of the Uganda Episcopal Conference and Bishop of Kiyinda Mityana diocese. The prayers were held under the theme: "Because of the Lord's great Love, we are not consumed, for His compassion never fails.”

In his sermon, Rt. Rev. Dr. Zziwa who was the guest preacher advised Ugandans to applaud God for the love he has shown them.

"It is not a mean achievement that Uganda successfully managed the awful (Covid-19) pandemic with minimal loss. All this is a testimony of God's love and compassion,” Zziwa said. He quoted Psalms 116:12 and 13; and Psalms 86:1.

He also applauded the government of Uganda, health workers who worked tirelessly to save the lives of Ugandans and advised them to continue loving one another as God has Loved us.

Apostle John Bunjo of Christian Restoration Ministries International prayed for national stability and unity while Pastor Laban Jjumba of Intercessors for Uganda prayed for the national economy, among others.