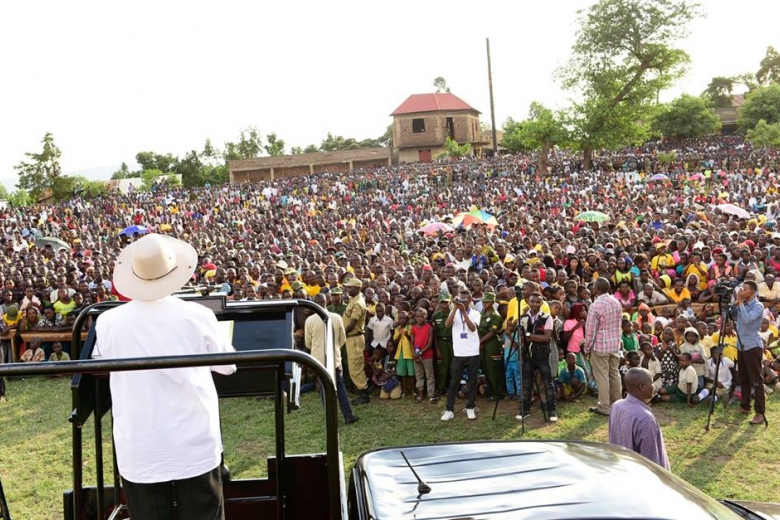 President Yoweri Museveni has called on the people of Kasese District in Western Uganda in particular and Uganda at large, to stop the detrimental habit of catching premature fish.

“The fish market was disturbed by wananchi in this area. It is taboo to eat a calf among the cattle keepers. You can only eat a bull. Likewise, it is not logical for you to catch and eat premature fish. Lakes Victoria, Kyoga and Albert became barren because of bad fishing methods. Following my intervention of deploying UPDF on Lake Victoria, we have to-date recorded availability of mature fish,” he said.

The President made the remarks at a public rally that he addressed at Karambi Primary School, in Bwera Town Council, Bukonzo West Constituency, Kasese District in the Rwenzori Sub-Region.

The rally followed reports by residents alleging that soldiers of the Uganda People’s Defence Forces (UPDF), who are deployed to oversee fishing activities in the area are compliant with fighting against catching premature fish, were mistreating wananchi. The President reiterated that if the residents of the area practice good fishing methods, they stand the opportunity of resuming and harvesting good and mature fish.

Mr. Museveni began his visit with a tour of the 120-acre Kitatura village irrigation scheme in Nyakyumb Sub-County of Bukonzo West Constituency. The Government has so far injected Shs.220 million in the project that has been in operation for 8 months and whose major water way covers 2.7 kilometres. Its water catchment area has origins in Mount Rwenzori.

The President revealed that he would soon appoint a team of specialists to study the situation regarding alleged disturbances of the fishing community by UPDF soldiers. He assured the gathering that all their complaints would be addressed to a logical conclusion. He called on them to join him in ensuring that only mature fish is harvested for the good of all the people.

Mr. Museveni informed the rally that the NRM Government has repaired Mubuku Irrigation Scheme in Kasese District. He expressed happiness that Kasese District Administration has embarked on an irrigation scheme in the Bukonzo West Constituency adding that more funds would be injected in the project to ensure sustainable agro-production in the area.

The President assured the people of the area that they have the opportunity to banish household poverty through the 4-acre agro-production plan that the Government launched in 1996. He said that people are capable of harvesting money by growing food crops, coffee, fruits and milk production. He informed the rally that people who listened to his advice have benefited. He cited the neighbouring people of Bundibugyo District as an example who have recorded improved household income generation. He also informed the people of Kasese District that the people in Masaka District have reaped big mainly through coffee production.

Mr. Museveni strongly advised small-scale landowners to concentrate on the production of high value crops; noting that through cultivation of apples, they stand to earn Shs.65 million per acre per annum. He observed that even those owning pieces of land below one acre, also stand the opportunity of getting some good income from the production of apples on top of growing mushrooms. He reminded the gathering that people can only gain from growing maize, cotton and tobacco if they have over 100 acres of land.

Regarding the development issues in the Sub-Region, the President said that several people in the area are benefiting from Kasese-based Hima Cement Industry. He informed them that plans were underway to revive copper and cobalt mining in the District. He also revealed that the erection of an electric fence to protect their agro products from wildlife is progressing well and that a similar undertaking has progressed well for Kyambura Wildlife Game Reserve. He revealed that the target is to fence off the entire Queen Elizabeth National Park.

President Museveni thanked them for living well with the neighbouring people in the Democratic Republic of Congo. He congratulated the people of Kasese upon their resilience leading to the defeat of the Ebola disease and the insecurity caused by the Allied Democratic Forces (ADF).

The Bukonzo West MP, Hon. Godfrey Katusabe, requested the President to save the community from the collapse of the fish market.