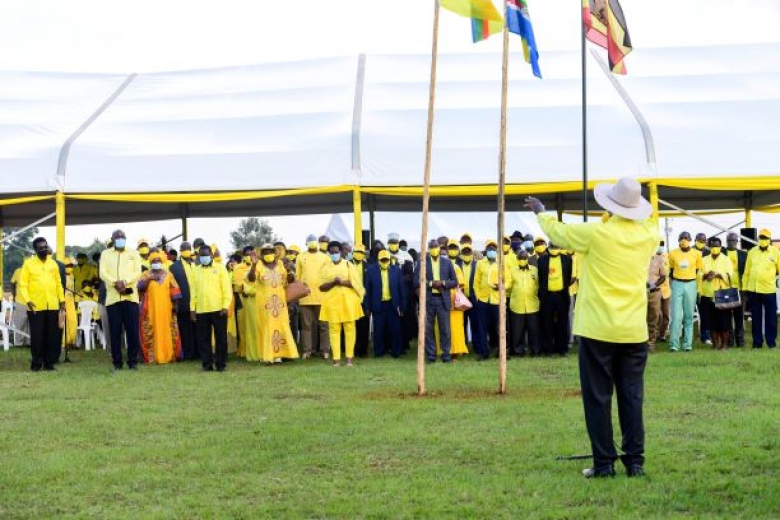 President Yoweri Museveni who is also the NRM Presidential flag bearer has scoffed at opposition leaders who he says have failed to show the people ways of eradicating poverty and yet criticize his leadership and want him to leave the Presidency.

“They say agende, agende! To go where, when most of the work we started has not been concluded. In 1995, my experiment  of getting out wanainchi from poverty worked in Nyabushonzi, I told the Besigyes’ to do the same in their areas but they didn’t. Now they are saying agende –agende,” he said.

The President was on arrival, received by leaders of the area who included the LC1 chairman of Rwakabengo village in Rukungiri municipality Mr. Mwesigwa James who assured candidate Museveni of total support from his area.

The Bishop of North Kigezi Diocese the Rt. Rev. Benon Magezi prayed for peace and thanked God for the good leadership of President Yoweri Museveni.

The NRM Chairman Rukungiri who is also the NRM flag bearer for Rujumbura constituency Jim Muhwezi thanked President Museveni for the way he has guided the country and handled the COVID-19 pandemic.

The people of Rukungiri thanked President Museveni and the NRM government for numerous development programs that have been implemented in the district that include among many others the construction of the Kyabahanga bridge linking Rukungiri and Kanungu districts.

They were also grateful for the 52billion Kahenje gravity water scheme that is almost completed.

“It will be a big landmark in the lives of the people of the Rukungiri and the neighbouring communities,” Jim Muhwezi said.

In a memorandum by the people of the area that was read by Muhwezi, they praised the NRM government for the wealth creation program that has seen many farmers shift from subsistence to commercial farming citing Mr. Kamagambe who has 20 acres of coffee earning over 100 million shillings in a year.

“Mr. Kamagambe has even built permanent houses for his 4 wives. We know your Excellency that you are going to win. In this elections, the people of Rukungiri are going to make sure that this happens,” he said.

The NRM chairman for Kanungu district Mr. Karabenda read the memorandum by the people of his district who thanked President Museveni and the NRM government for the fish project in Kihihi that has benefitted many youth. They also expressed their appreciation for rural electrification programme that has enabled them access electricity. He assured Candidate Museveni of solid support by the people of Kanungu district.

The NRM chairman Western Region Hon. Dr. Chris Baryomunsi thanked President Museveni for the peace now enjoyed in the country noting that before NRM came to power the country was a failed state.

The Prime Minister the Rt. Hon Ruhakana Rugunda called on all flag bearers at all levels to ensure that NRM wins because of the strong candidate the party has. That is my recommendation to all people of Rukungiri, Kanungu and Uganda as a whole.

President Museveni briefly told the gathering of the history of the region and Uganda in particular and called on the people to judge for themselves between him and the opposition, whose contribution in terms of development is not seen and are bent on misleading the people to oppose NRM.

He later told them of the genesis of the struggle to make Uganda a country that it is today and that is strong on the world map.

President Museveni urged leaders to encourage their people to get involved in commercial farming for both food and financial security.

Later, President Yoweri Museveni recieved a spear, sheild, stool and ceremonial chair from the delegates as symbols of leadership.