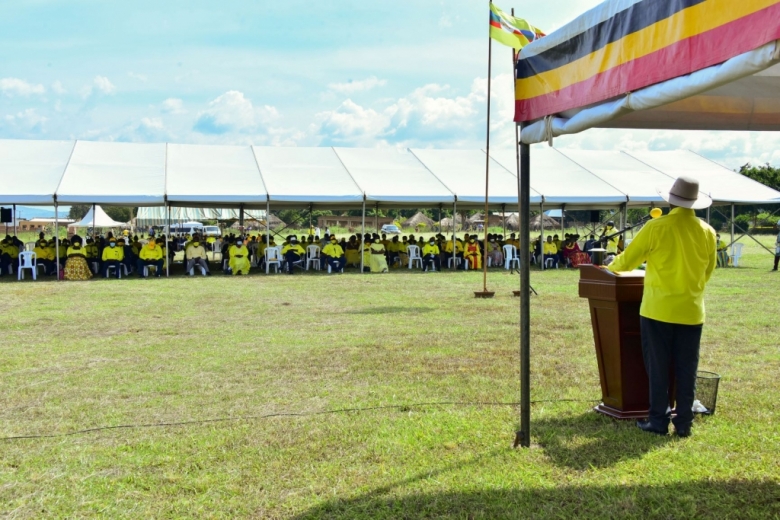 The strength of the NRM and its ability to govern for over three decades is rooted in party's push for the population's interests instead of identity, President Museveni who is also the NRM Presidential candidate has said.

Party cadres, therefore, must appreciate this and make the same case if the party is to continue prospering, he added.

Mr Museveni, who is the NRM Presidential flag bearer, made the remarks as he met select party leaders from the Greater Nebbi zone in Nebbi Town.

It was the second day of campaign engagements for President Museveni in West Nile, as he met leaders from Nebbi, Pakwach, Zombo and Madi-Okollo.

Prior to the meeting there was excitement as President Museveni, who arrived at the venue in the early afternoon, joined the awaiting party led by Deputy Speaker of Parliament, Jacob Oulanyah, in dancing to the Northern Uganda chart-topping song, "Pilili Yoo Leng" by Romeo Odong.

He added, "That is why it has been able to build a  strong national army, unite the politics, bring peace, attract local and foreign business, produce goods and services, collect more taxes, cause social economic transformation and work with other African states for a strong continent."

These gains, said the NRM presidential candidate, explain why the campaign slogan" Securing Your Future" is a reality and not empty talk.

The message and practice of focusing on human needs, said Mr Museveni, is the reason the NRM party has won resoundingly since the 1996 elections.

The politics of identity, according to President Museveni, is what had driven the country into political turmoil for the immediate post-independence years.

"If the needs of the people are the same,why do you separate them? That is why the NRM was formed, to correct those mistakes," he said.

Candidate Museveni observed that the return of the Asian properties in Uganda to the owners had  attracted even more investors who have set up many factories in the industrial parks in Kampala and other towns.

These factories, he said, have created over 700,000 jobs and more are expected, besides more revenue paid to government, developing skills of Ugandans among others.

The President also appealed to the people of Greater Nebbi and West Nile to undertake commercial agriculture to improve their household incomes.

"The big problem is subsistence farming in homesteads. If we all go to commercial agriculture we shall produce more products and create more jobs," he said. "That is how socio-economic transformation happens."

He said Uganda needs a new society hinged on better incomes, translating into better houses, health, transport, education for all, clean water and others.

The President called upon the people of West Nile and the Greater Nebbi in particular to observe the standard operating procedures to avoid contracting the corona-virus.

The virus, he said, can be controlled and its effects mitigated, if people observed the SoPs. Going against them, President Museveni warned, would be exposing people to possible death.

Mr Oulanyah urged the young people in West Nile sub-region to reject the politics of violence and chaos, saying President Museveni had secured the future of Ugandans.

He called upon the young people from West Nile to arise and support NRM candidate Museveni.