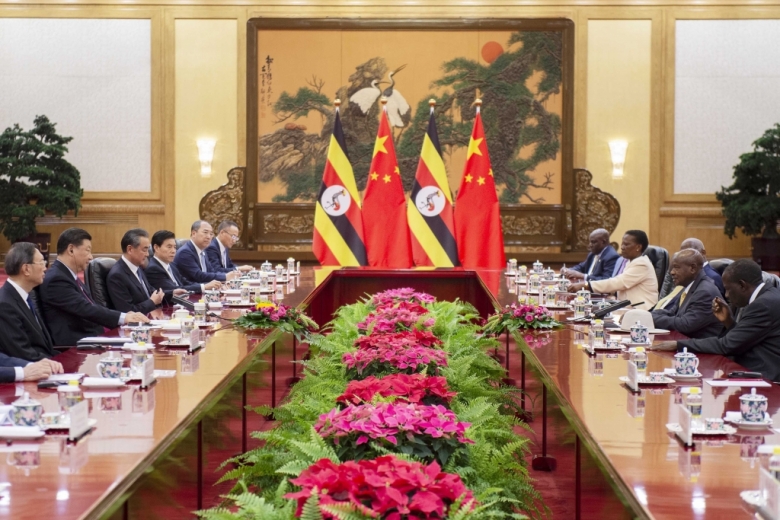 President Yoweri Museveni  has met with his Chinese counterpart, Xi Jinping, where he thanked his host for supporting Uganda and Africa's development.

In a meeting at the Great Hall of the People in Beijing, President Museveni, who is on a four-day working visit, passed his gratitude to President Jinping for inviting him to China.

"I thank you for inviting me to open the Coordinators’ Meeting on the Implementation of the Follow-up Actions of the Beijing Summit of the China-Africa Cooperation (FOCAC) this morning," said President Museveni.

President Museveni commended China for supporting Africa's liberation cause, terming them as a reliable partner.

"China and Africa have been close for a long time. When there was revolution in Russia in 1917, China in 1949, we, the struggling people, got reliable international partners in our liberation cause," he said.

"We have done many good things since you took over the government. In Uganda, you have helped us build two power stations that produce about 900MW. We have also built Industrial Parks. We are satisfied with cooperation with China in past and under your leadership," said President Museveni.

On his part, President Jinping thanked President Museveni for working closely with China and honouring the invitation.

"I am glad that our countries, especially under your leadership, have seen a deepening political mutual trust while we maintain close coordination in many aspects," he said.

The Chinese leader reiterated his country's commitment to support Africa and Uganda's development in a respectful and equitable manner.

After their bilateral talks, the two leaders witnessed, as their ministers signed, five Memoranda of Understanding in different sectors.

The first pact was a framework agreement between the National Development and Reform Commission of China and Uganda's Finance Ministry on developing cooperation on production capacity.

The second pact will see the two countries jointly promote the implementation of the economic and trade measures of the eight major initiatives of the FOCAC Beijing Summit.

The third agreement will see the countries enhance cultural cooperation between 2019 and 2022.

The fourth pact is a grant aid of Yuan 300 million from the Chinese government to Uganda to be used for implementation of projects to be agreed on by both countries.

The final pact, worth Yuan 34.6 million, will be support to Uganda by China for the G77 Summit to be held in Kampala in terms of SUV vehicles and conference support.