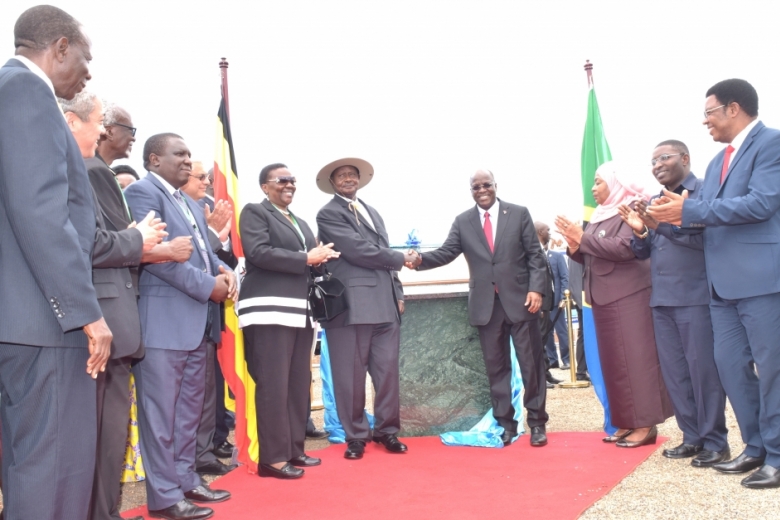 The two leaders used the occasion to underscore the need for fast integration of the East African community so as to ease the joint planning, financing and implementation of major projects that are crucial for the development and transformation of the region.

The heated crude oil pipe line, the longest of its kind in the world, will cost $3.5 billion and will be completed by 2020 making Uganda join the ranks of oil producing countries. The pipeline works will be undertaken by Total E&P, CNOOC and Tullow Oil together with the two governments of Uganda and Tanzania. The pipe line will on completion carry 216,000 barrels of crude oil for export daily.

He said because of the numerous concessions from the Tanzanian government, the cost of delivering a barrel of oil from Hoima to Tanga will be $12.2 per barrel, making Uganda’s crude oil propfitable even at today’s rate of $50 per barrel.

“On behalf of Ugandans I thank President Magufuli and our Tanzanian brothers for giving us the following concessions on the pipe line. There will be no pay transit tax, no Value Added Tax, no corporate income tax, gave us 20 years depreciation tax holiday, granted us a free corridor where the pipe line passes and promised to buy shares in the pipe line,” President Museveni said.

“There already confirmed hydro-carbon deposits in Eastern Democratic Republic of Congo and Turkana and there are possibilities in Rwanda, Tanzania and Burundi and once these are confirmed the pipeline will be more useful for the region,” Mr. Museveni said.

At the colourful ceremony at the ocean-side attended by thousands of Tanga residents and punctuated with song and dance, President Museveni said the East African countries are endowed with enough natural resources that can transform the region and get her people out of poverty if well utilized.

He noted that the region needed to work on stopping the culture of producing what we it does not consume and consuming what it does not produce that has greatly affected the balance of trade and enriched other people at the expense of our citizens.

“Our East African Community imports $33 billion per annum worth of goods and services while our exports are $13.8 billion, making us donate resources, jobs, taxes and income to the developed world to enhance their technology. Export led growth is very important and India and China can bear testimony and we need to focus on it,” said the President.

President Museveni, however, said whereas natural resources are important for generation of wealth, the greatest resource to the region are her people who consume and produce goods and service.

“These natural resources are important but more important for us are the people. The 170 million East Africans because they consume and produce,” he said. “They are producers of goods and services and will do well once we harmonise. They help us negotiate credibly with bigger markets and are resourceful in the forward thrust of these economies.”

President Museveni also noted integration was also important for strategic security and reminded the people that Africans have for 500 years suffered evils such as slave trade, colonialism, epidemics, war, neo-colonialism among others because they could not guarantee their strategic security.

“Political fragmentation aided these calamities. Europeans came as explorers and ended up as colonisers as our chiefs watched or aided them,” said Mr Museveni. “Our Independence leaders (Nkrumah, Madibo, Nyerere) guided us correctly. Economic integration alone is not enough. Political federation is the therapy for our very survival. Since the 1960s, I have been their disciple.”

He noted that in the Second World War, highly developed but small states were the first victims of Hitler and it took the intervention of mighty countries like USA and Russia to stop Hitler.

“Where is the insurance of the African continent, where is it’s gravity in case of anything? The East African leaders of today need to find the answer,” he stressed.

He saluted the late Tanzanian President the late Mwalimu Julius Nyerere for the support he rendered to the people of Uganda and other African countries during their struggle for self-determination and other liberation struggles.

President Museveni equally saluted the private partners in the oil pipe line project (Total, CNOOC and Tullow) and assured them that with the right working relationship, they will together end in a win-win situation.

About Tanga, the city where the pipeline ends, President Museveni said it had a historic significance to Uganda.

“In 1972, the Kikosi Maluum under Obote landed here in Tanga from Sudan before moving to Handane to set up base. I also smuggled 14 guns to Kampala through Horo Horo, which is near here during our Liberation struggle,” he told the cheering crowd.

On his part, President Magufuli thanked President Museveni and his government for trusting Tanzania and choosing the Tanga route for the project despite the other options available.

He said it was a vote of confidence to the Tanzanian people. He said that Tanzania had to sacrifice by offering several concessions to Uganda just like it did in struggle against dictatorship but said that Tanzania was certain they will greatly benefit from the pipe line project.

“This pipeline could have gone to a shorter route of 900kms but Museveni has supported us. We had to make concessions for our Ugandan brothers like we have previously done to liberate them,” he said.

“We had to sacrifice but we shall also benefit. During construction, direct jobs will be between 10,000 to 15,000 while temporary ones will peak to 30,000. Already hotels are benefiting as guests come here and we shall set up a cement factory here, one of the biggest in East Africa,” said Mr Magufuli.

He said with the oil coming to Tanga, Tanzania would now buy crude oil from Uganda instead of incurring high exports of importing from the Arab world, while indicating that Uganda would also find it cost-effective selling to Tanzania.

Mr Magufuli added that Tanzania also sought to gain from the skills and expertise of Ugandan technocrats who had built experience in the extractives sector.

“Oil was discovered by Ugandan experts. They have done it. They will come to Tanzania to check our hydrocarbons in Tanganyike—where there are traces of oil. If we find it, they will bring their skills to Tanzania,” he said amidst applause from the excited crowd.

The Tanzanian President warned speculators who are rushing to set up houses in the pipeline path, saying the government already has satellite images, including already existing property. He warned that only those with bonafide claims would be compensated while speculators will walk away empty-handed.

He challenged the contractors to ensure they complete the project on time, saying anything short of that would be a big blemish on their profiles and countries of origin.

On the Ugandan side were 1st Deputy Prime Minister and Minister for East African affairs Kirunda Kivejinja, the Energy and Mineral development Minister Irene Muloni, the Finance Minister Matia Kasaijja and the State Minister for Bunyoro Affairs Ernest Kiiza among others.

-       In Uganda, the pipeline will run through eight districts and 24 sub-counties. In Tanzania, it will go through eight regions and 24 districts.

-       Its estimated cost is $3.55 billion while constriction should last three years.

-       It will have a daily flow rate of 216,000 barrels with six pumping stations and two pressure reduction stations.