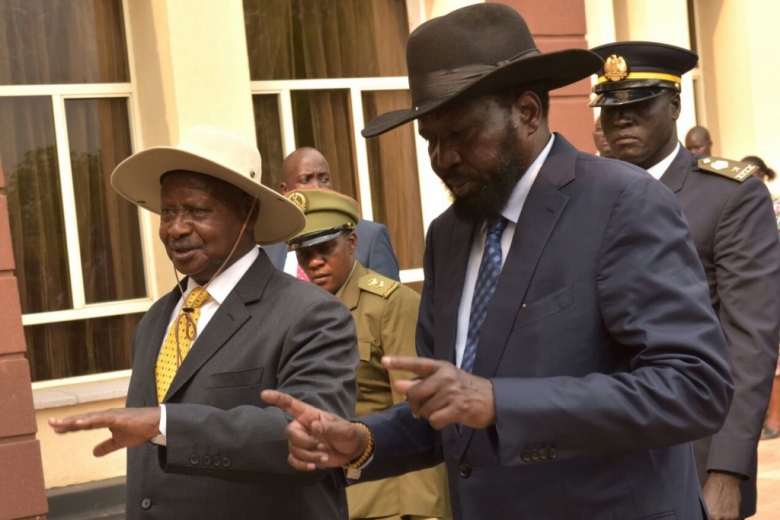 President Yoweri Museveni has said that the warring parties in South Sudan should stop and give peace and democracy a chance.

The President's remarks were made in a brief address to the press this afternoon in Juba, the South Sudanese capital following a private meeting with his South Sudan counterpart, Salva Kiir, at Juba State House.

President Museveni, who was in South Sudan for a one-day official visit on invitation of President Kiir, said the people had fought for self-determination and they should be given chance to exercise it democratically.

"I appeal to the Transitional Government, headed by His Excellency Kiir and the other stakeholders, to stop all actions involving insecurity so that people focus on elections as soon as possible," said President Museveni. "It's what people of South Sudan fought for."

He added: "My prayer is for the people of South Sudan to regain sovereignty through the vote. The fighting should stop and allow the people to regain their power which currently is with those with guns."

On his part, President Kiir thanked Mr. Museveni for honouring his invitation.

"I appreciate his advice. President Museveni has rich experience and we can gain from him. We have covered several issues on our bilateral relations and I will take all advice he's given to me," said President Kiir.

Earlier, on arrival at Juba International Airport, President Museveni was received by South Sudan Vice President, James Wani Igga before inspecting a guard of honour.
Meanwhile, the governments of the two countries have agreed on a mode of payment for Ugandan traders who supplied South Sudan with food items between 2008-2010.

Mr David Bahati, the Ugandan State Minister for Finance in charge of Planning, who accompanied President Museveni to Juba, said the Agreement was struck after a sideline meeting with the South Sudan Finance Minister, Stephen Dhieu Dau. The details, Mr Bahati said, would be communicated to the responsible parties.

Mr Bahati was joined in the discussion by Hon Anite Among, the Bukedea Woman MP who also sits on the Finance Committee of Parliament and Mr Apollo Nyegamehe, a member of the Uganda Grain Council, representing traders. END