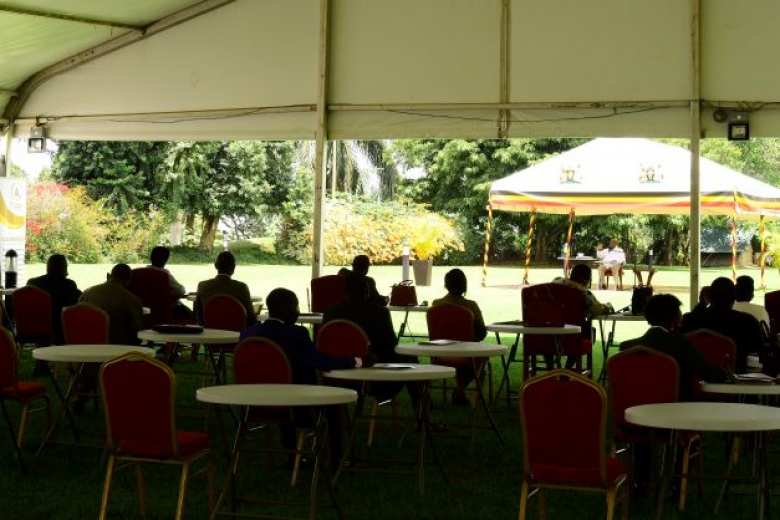 President Yoweri Museveni has inaugurated the Presidential CEO Forum (PFC) with a call to the business community to adopt import substitution and export promotion if the country is to realise tangible economic progress.

“If you want the country to grow, you need to look at what business you are doing. Does it bring blood here or does it suck blood and take it out? That is the problem I used to have with KACITA. Their business was importing. They even reached the extent of importing wigs. The main message is, please minimize and eliminate importing,” he said.

The ceremony took place this afternoon at State House Entebbe.

The Presidential CEO Forum is a direct and adequate link between the private sector leadership, CEO's from Corporate institutions and government executives with the aim of contributing to the National Development Agenda.

President Museveni noted that there are two economic actors in the economic history of the world.

“Among those economic actors, there are those who import, not importing raw materials or inputs but finished goods. I would like to discourage these and gradually convert them to actors who make things from here," he said.

The President said he was happy they have agreed on paying scientists well.

“A scientist is not an observer but an actor in the economy. Science is the basis of modernisation. You must go to higher-level technology so that we protect ourselves but also make money. Foreigners have been making money out of germs for a long time, we should get money from the pathogenic economy,” he said.

Mr. Museveni appreciated the value in having business forums like PCF which he said help government in policy formulation. He directed that government departments such as the Prime Minister’s office and the Ministry of Finance should always consult them before formulating policies.

He said the government will in turn facilitate the business community with the necessary infrastructure such as roads, cheap electricity, railway and reduce the cost of money through Uganda Development Bank to lower the cost of doing business in the country. He said that schools and technical colleges should also step in to provide necessary skills that are needed to do business.

The Prime Minister Rt. Hon. Robinah Nabbanja urged the CEOs to share the challenges that affect them while doing their business. She said some young people want to get rich faster than the businesses that employ them.

“I would like to ask the CEOs to report the corrupt tendencies of government officers who deal with them,” she said.

The Chairperson Presidential CEO Forum, Ms. Barbra Mulwana said the inauguration of the Presidential CEO Forum marks a significant milestone within the private sector fraternity to have access to championing the government's agenda towards fostering the social economic transformation and development of Uganda.

Ms. Mulwana said that the PCF will deliver on its vision through three key initiatives that include fostering the social economic transformation agenda in all policy conversations that are to administer private sector participation, develop a well profiled and vetted data Bank of Ugandan CEO’s and compliment government with practical interventions on economic recovery, entrepreneurship growth and value addition that will enhance home- engineered industrialisation.

The team assured the President of their commitment to soldier on in the war for economic prosperity. They said they are ready to join hands with the government to fully liberate Uganda on the economic front.

The ceremony was also attended by the Minister of Finance, Planning and Economic Development Hon. Mattia Kasaija and various CEOs from the public and private sector