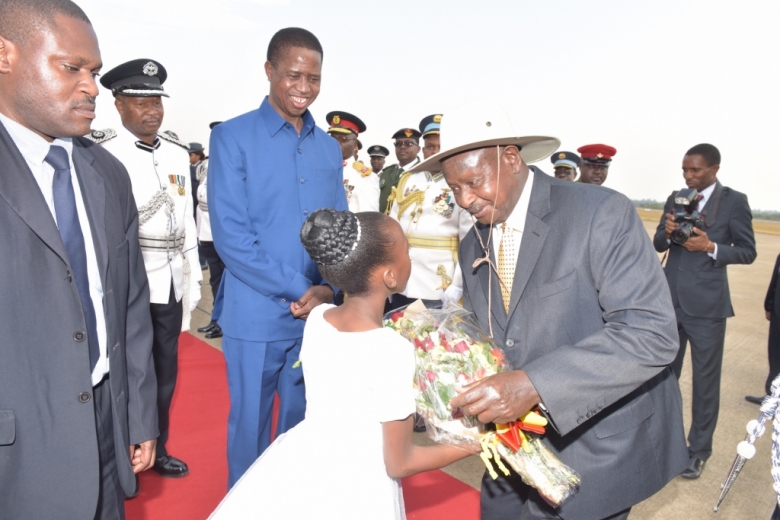 President Yoweri Museveni has arrived in the Zambian Capital City Lusaka on a two-day state visit during which he will also be the chief guest at Zambia’s 52nd, Independence anniversary celebrations due on Monday October 24th, 2016 at the Freedom Square.

The President was received at the Kenneth Kaunda International Airport by his host President Edgar Chagwa Lungu together with the First Lady Esther Lungu and the courtesy Minister Hon. Given Lubinda, Minister of Justice.

On arrival, President Museveni was presented with a bouquet and and a 21 gun salute, he was treated to arrival ceremonies witnessed by Zambia service chiefs, the Patriotic Front secretary General Mr. Davies Mwila and the Mayor of the City of Lusaka His Worship Kalumba Wilson. He later inspected a guard of honour mounted by officers and men of the Zambia Armed Forces and was entertained by various cultural troupes.

The President will later hold a tete a tete meeting with his host President Lungu at the Zambia State House and will also be hosted to a State Banquet in his honour.

President Yoweri Museveni will be chief guest at the National celebrations of Zambia’s 52nd, Independence anniversary in Lusaka on Monday October 24th, 2016.

The President will lay a wreath at the Freedom Statue before paying a courtesy call on Zambia’s founding father Mzee Dr. Kenneth Kaunda, the First President of the Republic of Zambia.

On 24th October 1964, Zambia became independent of the United Kingdom and Prime Minister then, Kenneth Kaunda became the inaugural President.

The President is accompanied by the Minister of State for Foreign Affairs Okello Oryem, Members of Parliament; for Tororo County North Hon. Annet Nyakecho, Hon. Peter Ogwang of Usuk County and Uganda’s High Commissioner to Zambia based in Dar es Salaam Dorothy Hyuha.