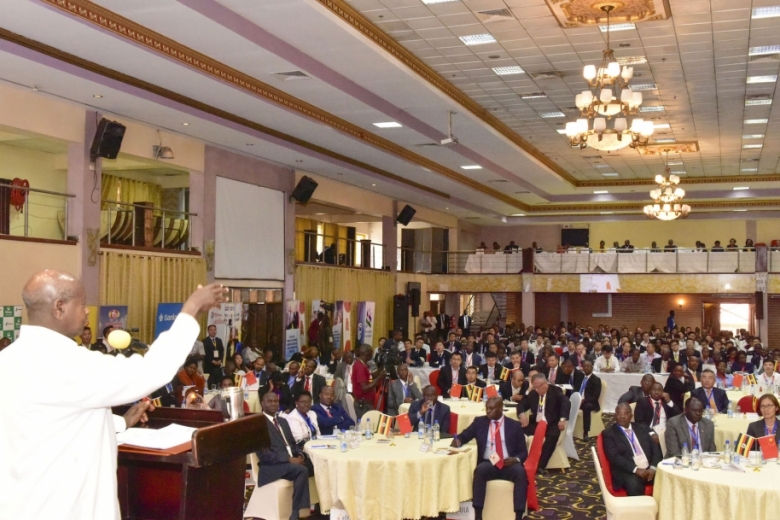 President Yoweri Museveni has asked Chinese companies to invest in Africa stating that the continent is very rich in natural resources.

He made the call during his address to the second Uganda-China Economic and Trade Cooperation Forum at Hotel Africana in Kampala.

President Museveni said that after analysis, the government of Uganda has identified ten bottlenecks that have kept the country and the African continent poor.

The President said that these bottlenecks affect the profitability of enterprises. “Infrastructure is a very big problem because it affects migration of businesses. Businesses cannot come here when we have  high costs of electricity and transport,” he said.

He said that the Government of Uganda is taking steps to address the identified bottlenecks.

“Africa, even with some of these bottlenecks, the rate of return on investment is higher than in Europe. With improved electricity, transport and cost of money, the return will be much higher than it is right now,” he said.

President Museveni thanked the Chinese Government for its contribution to addressing the bottlenecks.

“We want to assure our Chinese friends that as far as Uganda is concerned, we are dealing with these bottlenecks and thank the Chinese Government for helping us deal with some of them,” he said.

The Minister of State for Planning, Hon. David Bahati, said that the economic cooperation with China is growing stronger and stronger every day.

“This cooperation has supported public projects like Karuma, Isimba dam and airport expansion, among others. All these investments have helped Uganda lower the cost of doing business,” he said.

The Chinese Ambassador to Uganda, Mr. Zheng Zhu Qiang,said that cooperation between his country and Uganda is strong and has realized many achievements.

“Trade volume between China and Uganda in 2017 was US$ 800 billion,” he said adding that China is committed to supporting the development of African countries, including Uganda, in their development paths.

The Uganda Investment Authority in partnership with the China Chamber of Enterprises in Uganda are hosts of the Uganda-China Economic and Trade Cooperation Forum.

The Forum is an annual event through which investments from China are recognized for their contribution towards industrialization and the creation of employment opportunities for Ugandans.

This year, the forum’s theme is ‘China-Uganda join hands: Win-win Cooperation, Mutual Development’.It will also lay a good foundation for Uganda’s participation in the upcoming Forum On China Africa Cooperation (FOCAC) Summit 2018 due in the Chinese Capital of Beijing. The Forum will also give domestic investors an opportunity to partner with investors from China.