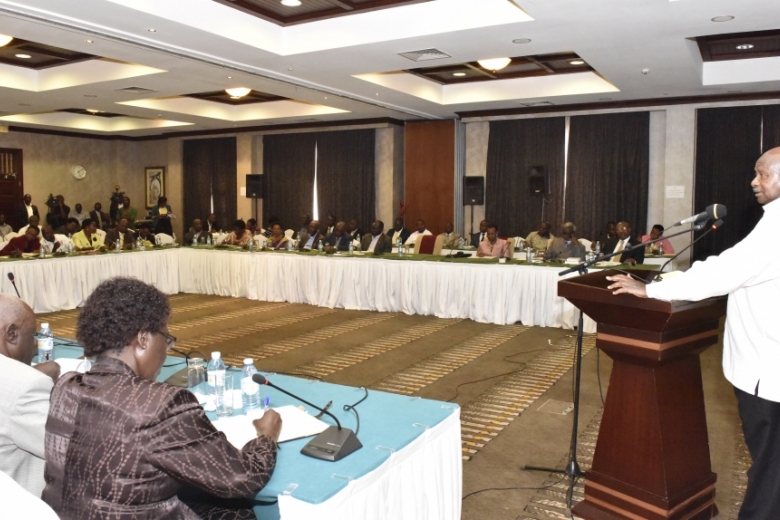 President Yoweri Museveni at the clossing of a two-day Cabinet Retreat  strongly warned  Ministers, politicians and civil servants against corruption. He said that the vice was a major roadblock to the country’s development agenda and described corruption as a great shame to the nation.

The Retreat has been taking place at the Serena Lake Victoria Hotel in Wakiso district.

The President told his Cabinet that it was a great shame that some Ministers, politicians, senior government officials and civil servant, are reported to be in a culture of soliciting bribes and favours from investors who come to the country. He said that this has frustrated many of the investors leading many of them to leave the country thus damaging the country’s image.

“I have some information about government people who have been asking for favours from investors and this must stop or else people will be embarrassed. What I am talking about are facts and it is a great shame,” he said.

“You should not ask for favours from investors to pay school fees for your children or do this and that. If you have problems, call a clan meeting and solve it as a family but not through corruption,” he added

President Museveni also warned his Cabinet about cases of infiltration by negative elements that have taken over government decision-making Centre and use them to committee crime or sabotage government programmes with impunity. He, therefore, said that security and intelligence organs at the Centre and in the districts, need to do all it takes to stop infiltration by the negative forces.

He cited as an example, the failure by the Police and security organs to arrest road construction workers who defiled children while constructing the Kamwenge-Fort Portal road that led to the suspension of the loan by the World Bank that ended up in halting construction works and costing the country money as one such example.

Mr. Museveni also warned the Cabinet over the reported unutilised loans and grants some of which, he noted, are about to expire and be taken back by loaning institutions. He, for instance, said that Uganda has loans and grants totalling to US$1.8 billion with the World Bank but only 10% of the funds has been utilised. He said that tough action awaits those who are negligently failing to utilise such funds.

He said that the country’s other major challenge is the delay in the rains that has negatively impacted on the agricultural sector - the backbone of the economy – but said that Ministers should task technocrats to give information on the cause of the delayed rains and when it should be expected so that they set the population in readiness for the agricultural season.

The Prime Minister, Dr. Ruhakana Rugunda, said that the Cabinet Retreat had reached a number of resolutions that included forming and working through Cabinet working Committees to enable Cabinet efficiency, the need to use evidence in policy formulation and implementation and the need to strengthen government information dissemination to the public.

Others included resolutions to prioritise the scarce resources at government disposal to the 23 particular areas as per the country’s development agenda, harmonizing the working relation between technocrats and the political class, improvement and management of efficiency in the public service.

The Retreat underscored the need to educate Ministers on matters of protocol, diplomacy and priorities in international relations, prioritisation of national security, increased budgeting for Kampala Capital City Authority (KCCA) and the need to ensure quick implementation of the decisions reached by Cabinet.