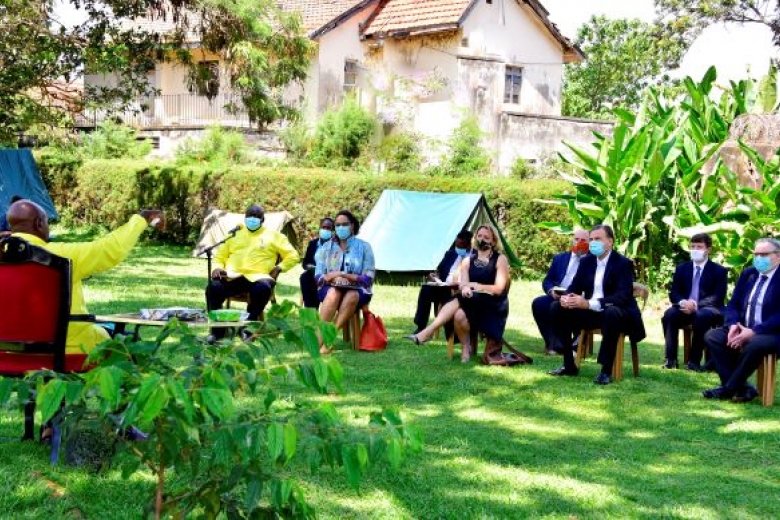 President Yoweri Kaguta Museveni has met and held discussions with the United States (US) and United Kingdom (UK) Special Envoys to Uganda about the situation in South Sudan.

The envoys who called on the President at Jinja State Lodge in Jinja City, briefed him about the political situation in South Sudan and the way forward to the current standoff.

President Yoweri Kaguta Museveni told the UK and US delegations that the real medicine to the South Sudan problem is elections. He says that elections will force political players in South Sudan to form alliances like it was in Kenya and that this will in turn create unity and peace in South Sudan.

“This same problem was in Kenya but was managed when they formed alliances and later held elections. Me I want to push them (South Sudan) to elections. If South Sudan can do the Kenyan way, elections will force them to make alliances and this problem will be history,” Museveni said.

President Museveni told his guests that the African Problem is ideological, and advised them to focus on promoting the correct ideology of interests in the African Countries.

“What our partners need to know is that many of the problems in Africa are ideological. You should therefore focus on ideology because it is the real problem of Africa,” Mr. Museveni said.

The President said that most Africans do not know that wealth comes from the four sectors of money, i.e. Commercial Agriculture, Industries, Services and ICT, adding that for them (Africans) think wealth can only be found in government jobs.

“Africa is 12 times the size of India and four times the size of USA. Our population is 1.3 billion people in Africa. We have a huge continent with a lot of resources. But for Africans, wealth only comes from government jobs,” he said.

He advised the delegation to also go and meet President Salvar Kiir of South Sudan and Dr. Riek Machar to have their sides of the story so that a way forward is sought to solve the South Sudan problem once and for all.

The United State Special Envoy H.E Stuart Symington IV who thanked the President for sparing time off his busy campaign schedule, commended President Museveni and the government for the efforts and role played to secure South Sudan.

“Thank you for sparing time to talk about South Sudan your neighbor. We have seen and appreciate the work Uganda and the neighbors are going in South Sudan” Amb. Stuart Symington IV said.

Ambassador Stuart Symington warned about the insecurity that may arise out of failure by the warring parties in South Sudan not put the signed agreement in force. He asked the President to encourage them to do so and move forward.

“We are going to see them together (Dr. Riek Marcher and President Salvar Kiir) for the first time this week. We shall be lobbying them about the issue of governors and the contested state”. Amb. Syminton said.

“If you could advise President Kiir and Marchar to take the direction of elections, this problem will be history. You are the person who can give them confidence”.  Amb. Robert Fairweather said.

The meeting recommended that the US and UK delegations go and meet President Salvar Kiir and Dr. Riek Machar to have a way forward.