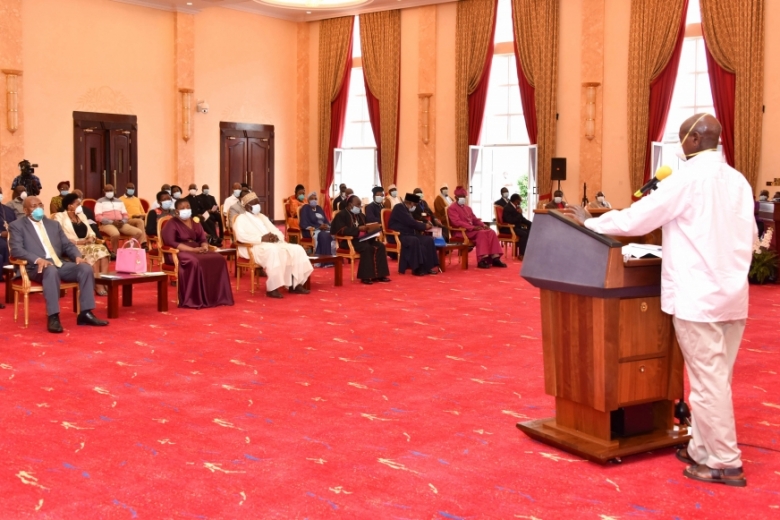 President Yoweri Museveni has urged Ugandans to continue wearing masks as the country starts a gradual lifting of the lock down that was imposed due stop the spread on COVID-19 global pandemic.

“We have avoided situations like for those abroad because we used maximum restrictions. We must now slowly open up but continue to avoid the virus through using masks, continue to treat as long as the numbers are not many and at the same time still look for the vaccine. We may soon resume public transport, but this will only work if we have masks on. If we fail to wear masks, we will have massive infections,” he said.

The President was speaking during the second National Day of Prayer against COVID19, which he hosted together with the First Lady and Minister for Education and Sports, Maama Janet Kataha Museveni at State House Entebbe.

The service was led by His Grace Archbishop Dr. Lwanga Cyprian of Kampala diocese under the theme ‘God’s power is complete’ derived from Psalm 46: 10 and and Quran 645:12. The first national prayers were held in March 2020.

The President who quoted Genesis 1: 26-28, noted that man was given dominion over nature and so in such times, man should dominate by avoiding a virus, treating it and getting a vaccine for it,” he said.

On the issue of the increasing cases of infected truck drivers from bordering countries, President Museveni noted that the movement of cargo would not be stopped, but he assured the country that he had talked with the other Heads of States of other East African countries and the matter would be dealt with.

“Many of you were saying that we should stop them, but if we stopped the trucks, how will the country survive? We are in talks with President Salva Kiir of South Sudan, President Uhuru Kenyatta of Kenya, President Paul Kagame of Rwanda and President John Pombe Magufuli of Tanzania and we are discussing this. We want the drivers to be tested by joint teams of the four countries. We don’t want them to be tested at the borders now, we want them to be tested from their origin,” he said.

He also noted that because of the ‘Covid19 shake-up’ people must ensure that Ugandans who drive must all be healthy. This was because most of the drivers that had been checked were found with diseases like diabetes, which would also partly explain why there were many accidents on the road.

On the issue of corruption, President Museveni noted that he would seek advise from religious people who would avail to him leaders who they deemed godly and incapable of corruption, to help in leading the country during the crisis.

The First Lady, Maama Janet Kataha Museveni in prayer, thanked God for the unity of believers in such times and for the exemplary leadership of President Museveni through the uncharted waters. She thanked God for the strong medical teams and the generosity of Ugandans during the crisis. She asked God to lead the nation as it goes through the gradual lifting of the lockdown and for God to save people in the times of the heavy rains.

Archbishop Lwanga thanked God for having spared the life of Ugandans as there has been no single death recorded so far resulting from the pandemic. He also applauded President Museveni for the excellent leadership in the country and called upon Ugandans to continue trusting in God.

“We are here because we are a nation of believers. It is a time to be still and know that he is our God and his power is complete. Uganda must continue to whole heartedly trusting in the father. We call for people around the world to pray according to their respective religions, fast and help one another.  We also pray for scientists to find vaccines and a cure for the virus,” he said.

Qouting Ecclesiastes 3: 1-8, Archbishop Lwanga noted that there was a time for everything and that while this was a time of suffering, it was also of loving God and our neighbors, a time for hoping and for praying.

In a powerful sermon delivered to the nation by the Archbishop of the Church of Uganda, Rev. Dr. Stephen Samuel Kaziimba Mugalu, Ugandans were called upon to continue seeking for God’s wisdom and guidance despite their desperate need for the lockdown to be lifted, and to reach to God in such a time.

“We are here to seek God who has the power over existence. I thank the First Lady, our intercessor and President Museveni for presenting this place as one where we seek God. We are wondering what God is up to? Maybe he wants us to be still and reach out to him, how can the entire world be locked down? Isn’t God real whispering to us something? He is speaking to us and telling us to slow down. This is the time for us to call unto him. This is not just COVID-19. This is God calling us back to Himself,” he said.

Giving an example of the tenacious medical team in Uganda, Archbishop Kaziimba said that it was in such a time that God has made countries like Uganda realize that they have the capacity to run their own country and that there was no need to go abroad for treatment. He reiterated that such times revealed to the country on which sectors they must prioritize.

“Those in developed countries need to know that God is at work. The scientists are not in charge because they have limitations. The politicians, religious leaders are not charge but only God,” he said

He also noted that it was time for Uganda to renew its commitment with God and confess their sins. He advised married people to give attention to their families because they will never get satisfied with the things that we were chasing.

In the intercessory prayer for the nation and leaders led by His Eminence Shaban Mubaje, asked for victory over COVID 19 and all other calamities and asked God to grant the nation mercy, making it among the most secure nations in the world and to preserve the leaders in good health.

Bishop Joshua Lwere who interceded for the economy of the nation asked God to let land produce abundant food for its people. He also asked God to boost the country’s entrepreneural skills in such times and for Uganda to be able to manufacture it’s own medicine in such a time.

Apostle Serwadda prayed to God to heal the nation and help  people appreciate the small yet crucial things that bring together human beings like a handshake or a hug.