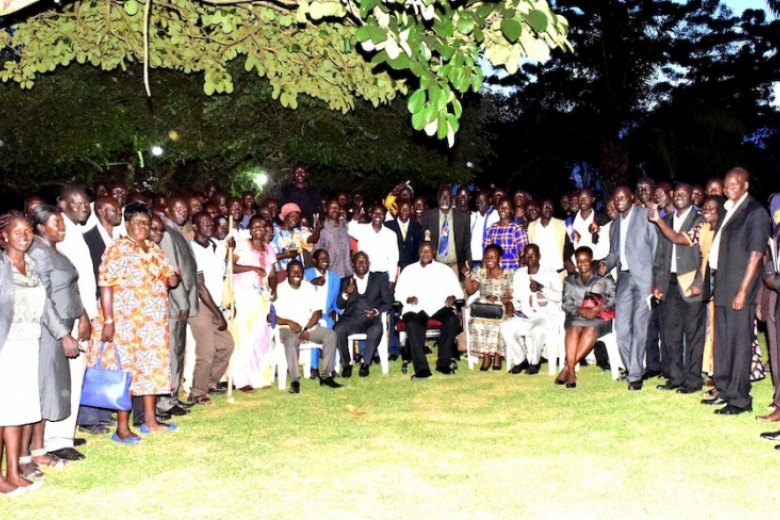 President Yoweri Museveni has told a delegation of Katakwi District local leaders that the National Resistance Movement Government is doing well in in several districts of Uganda as far as the strategic mobilization for improved household income is concerned.

“We have succeeded in wars of liberation. We are moving very well on the side of building the infrastructure. We are doing well on the side of homestead income strategic mobilization. I, therefore, want the districts of Teso Sub-Region to be the next example in growing fruits, opening up fish farming projects, dairy farming, poultry and bee keeping. The Sub-Region should also be seen as an agent of change in socio-economic development to eradicate poverty at household level,” he said.

The President addressing a meeting of Katakwi District leaders from Eastern Uganda’s Teso Sub-Region, who called on him at his country home in Rwakitura, Kiruhuura District, led by Usuk County Member of Parliament, Hon. Peter Ogwang.

He told the delegation that the people of Uganda should appreciate the advantage of societal shifting from traditional to modern methods of faming in order to maximize production and profits by homesteads.

“What I emphasize for the people of Teso Sub-Region and the whole of Uganda is to denounce the practice of land fragmentation stemming from inheritance cultural beliefs,” he added.

In a memorandum to the President which was presented by Katakwi District Chairperson, Elakas Walter Okiring, the people of Katakwi District thanked him for uniting all local leaders of their area regardless of their political divergent affiliations in order to discuss and harmonise the issues affecting Teso Sub-Region’s development.

He enumerated the achievements realized in infrastructure development such as the on-going tarmacking of Soroti-Karamoja Road, the Ongole Dam water for irrigation and domestic use and the good security situation.

Other issues that the President and his Katakwi delegation discussed included the implementation of cattle restocking budget, the youth livelihood projects and establishment of vocational training centres in the region.