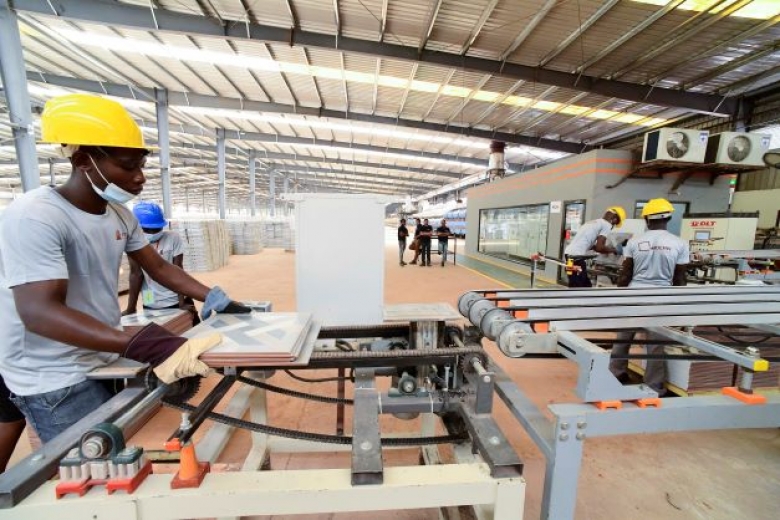 President Yoweri Museveni has tasked investors to buy raw materials locally. This, he says will increase employment opportunities among Ugandans specifically the youth.

H.E the President made the plea on Tuesday while commissioning Modern Tiles Company under Modern Group of Companies. The factory is located in Buikwe district.

Modern Tiles joins the likes of Goodwill and Millennium Tiles to promote the import substitution of ceramic tiles, which are important in housing and construction.

“By purchasing the raw materials locally, our people get jobs,” Mr. Museveni noted, adding that the availability of infrastructure like good roads put up by the NRM government has attracted investors to set up factories in the area.

He added that he will engage his Kenyan and Tanzanian counterparts to forge a way how to improve the transport network and make it cheap for Ugandans and business people in the region.

“I will talk to the Kenyan government to streamline transport by railway from Mombasa to Kisumu. Another route in Tanzania from Tanga to Mwanza leading to Ishungyezi to exploit iron ore mines. This can make this part of Africa an industrial base. The population of 1.3 billion Africans is a huge market,” the President observed.

“We shall rationalize the transport chain by reducing the use trucks from Mombasa or Tanga because it is not smart."

Gen. Museveni further attributed some of the causes of uprisings in some African countries to youth unemployment.

“What NRM government is doing now is to set up as many factories as possible to ensure that the youth are employed. This helps to prevent them from being diverted by economic and political saboteurs,” he said.

The Chairman of Modern Group Limited Ashish Monpara expressed sincere gratitude to President Museveni for creating a conducive and favorable environment that has enabled their company to prosper in the East African country.

“Your Excellency, our total new investment in the next five years will be more than 400 million USD,” Mr, Monpara assured.

He also disclosed that the group is looking forward to set up a pharmaceutical vaccine plant in Uganda.

“For this, we are already in discussions with Minister Evelyn Anite and Uganda Investment Authority to secure the appropriate land. Our budget for this pharmaceutical vaccine plant is 100 million USD.”