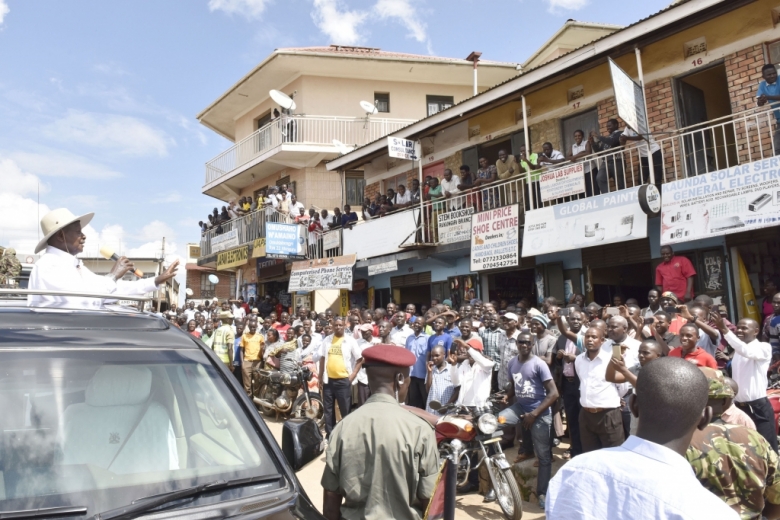 President Yoweri Museveni has said that in the fight to eradicate household poverty, the National Resistance Movement has always and will continue to target the poorest of the poor in society because it is useless to have a small fraction of rich people in a sea of largely poor people in Uganda.

Addressing a public rally in Nyakagyeme Sub-County of Rujumbura County, Rukungiri District in South Western Uganda , the President said that in the fight against household poverty, the National Resistance Movement leadership need to borrow a leaf from the NRA/M methods of work during the liberation war and how it worked with peasants and the ordinary wananchi who were not the most powerful or the elite to liberate the country.

President Museveni who gave a start-up capital of Shs.110 million to 5 local Savings and Credit Cooperative Organizations (SACCOs) – Nyakagyeme Development SACCO, Nyakagyeme Youth SACCO, Nyakagyeme Boda-Boda SACCO, Boona Bageigahare Development Group and Matooke Traders’ SACCO to whom he donated a lorry to help transport their produce to the market – said that the fight against poverty has to be at the graassroot level targeting the most poor and vulnerable in society.

“We can’t continue like this with a small fraction of rich people surrounded by a large population of poor people in a rich country like Uganda,” he said.

“I started this advocacy as early as 1967 in the Nyabushozi area and I was misunderstood and branded a communist by the leaders in Ankole at the time because I was fighting for the poor. They even told me that society was arranged that way that there must the rich and the poor,” he added.

“But that did not stop my campaign against poverty in Nyabushozi and the area today is a living testimony where the majority of the households have overcome household poverty,” he observed.

President Museveni said that for the rural population to overcome poverty, they need to adapt to commercial profit oriented agriculture as opposed to subsistence agriculture and avoid land fragmentation that is propelled by primitive inheritance rites that, he noted, has seen the country loose most of her valuable agricultural land.

Mr. Museveni tasked Movement leaders to get closer to the people, especially the youth, and understand their way of life so that they (leaders) act as change agents in the poverty eradication struggle. He noted that failure to do this has seen many youth join opposition Political Parties where they are merely being fed on lies.

He said that although he has started with Nyakagyeme Sub-County in the fight against poverty, the program will be expanded to cover the entire Rukungiri district.

President Museveni faulted the people of Rukungiri for voting FDC Members into leadership who, he said, are inexperienced in leadership and only survive on lies and propaganda, instead of the NRM leaders who have a time tested track record in finding solutions to the country’s challenges.

“It’s the Movement which fought Amin, Obote, Kony, ADF and brought about peace. What has the opposition done to deserve leadership,” he asked.

In a number of stop overs that he made around Rukungiri Municipality, President Museveni advised the people not to be detracted by politicians who come to them to seek their mandate so as to better themselves and never advise them on how to boost their household income, overcome poverty and better their way of life.