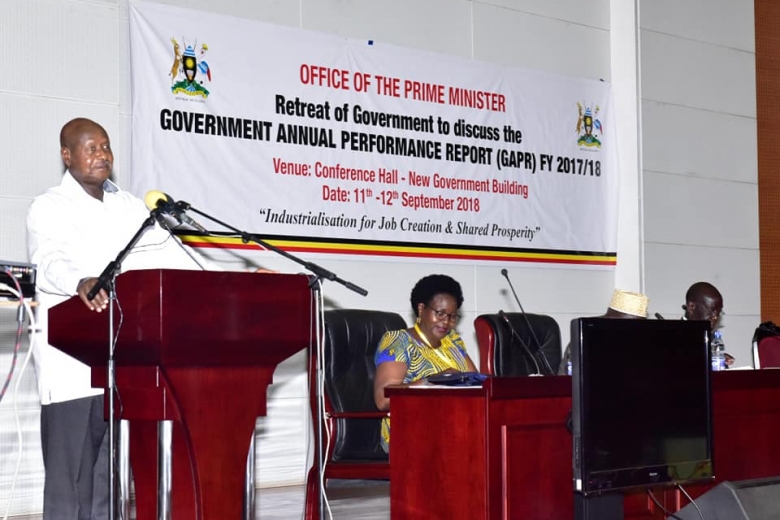 Opened a retreat of central and local government officials discussing the Government Annual Performance Report for the Financial Year 2017/18.

The theme for this year's retreat focuses on Industrialisation to create jobs and shared prosperity. I am glad that government workers are now recognizing the importance of industrialisation in job creation.

Although civilisation started in Egypt, Africa has not taken full advantage of this to industrialise. The chiefs failed to protect Africa from colonisation, which distorted our progression towards industrialisation.

However, even after independence, the leadership then did not do much to industrialise Africa. For an economy like ours to be modern, it must be founded on four sectors; commercial agriculture, industry, services and ICT.

When there was a recession recently in Europe, countries like Germany, which are mainly rooted on industries, did not suffer as much loss as those hinged on services (hotels, banks, etc). This means industries are a stronger bedrock for the economy.

Uganda is endowed with resources and can tap into all the four sectors mentioned above. Countries like Japan do not have as much resources, for example to engage in agriculture, but they have industry based on human intellect.

Uganda has potential for agriculture, industry and ICT.

Our industry should be based on agriculture and we have started on this. The ministry of trade and the Uganda Investment Authority should encourage more cotton-based industries because we have the raw material. The same should apply to coffee, through vertical integration.

Besides agro-processing, we are critically looking at industry based on the minerals. For example the huge deposits of copper in Kasese should be linked to production of cables, transformers, etc.

It is why I have insisted that companies lincenced to exploit these resources should have capacity to process them into final products like electricity cables for the copper industry. This is what we are doing with phosphates in Tororo.

We have also begun supporting innovations in ICT though this calls for more skilling. We are building the Standard Gauge Railway to make transport competitive and enhance industrialisation.