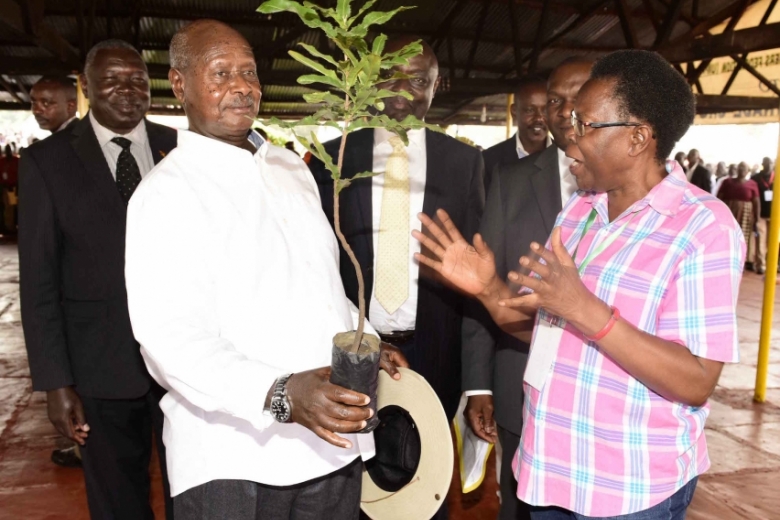 President Yoweri Museveni has singled out the practising of subsistence agriculture by the majority of the Ugandan population as a major factor that has made it difficult for the country to reap enough from its cherished agricultural potential.

The President was opening the 25th Annual Source of the Nile National Agricultural Show in Jinja Municipality. The theme of the show is ‘Managing the Challenges of Climate Change for Sustainable Agriculture.’

Mr. Museveni observed that the continued presence of 69% of the Ugandan population engaged in subsistence agriculture has posed a great challenge to the advancement of the agricultural sector in Uganda.

“On top of having many people engaged in subsistence agriculture, even those who attempt commercial agriculture tend to fail on enterprise selection and end up practicing non-profit oriented agriculture, produce products that either have a low price or have a small or limited demand on the international market,” he said.

The President, therefore, appealed to all stakeholders to mobilise farmers nation-wide to abandon subsistence farming for commercial profit oriented agriculture if the population is to be guaranteed food and income security as well as getting rid of poverty.

“We cannot benefit anything from agriculture when the population is still farming for subsistence purposes. The leaders, especially the political class, need to take it upon themselves to sensitize the population to do commercial profit oriented agriculture to guarantee food and income security otherwise you are committing political suicide by keeping around you a hungry and poor population,” he warned.

Mr Museveni said the challenge is a leadership problem because the leaders are not with the population to educate them about good and modern agricultural practices.

Regarding the challenges posed by climate change to agriculture in Uganda in particular and the world, the President said that the population must know that agriculture is closely related to environmental conservation and as such people must stop encroaching on wetlands, swamps, lakes, rivers and forests the elements that are both rain and water catchment areas.

“We can’t talk about agriculture without talking about the environment. Even if we are to irrigate our gardens, we need water but where shall we get the water from when we have destroyed all our water catchment areas leading to loss of rain. We, therefore, need to partner up and sensitise the population to peacefully leave these water catchment points,” he stressed.

Turning to animal and crop pests and disease, President Museveni assusred the country that the government is doing all it can to avail the best acaricides to control ticks that have become resistant to the traditional acaricides. He assured farmers of a lasting solution that will see all cattle in the country vaccinated soon against ticks and east coast fever.

On crops, Mr. Museveni hailed Ugandan researchers for the excellent work done that has seen them develop quick maturing, high yielding and drought resistant seedlings. He advised the population to take advantage of the seedlings. He, therefore, appealed to Parliament to debate and pass the Biotechnology Bill to enable the country use the scientifically enhanced seeds.

He revealed that new interventions are to be applied in agricultural mechanisation as well as funding of storage and agro processing facilities.

The Minister of Agriculture, Animal Industry and Fisheries, Hon. Vincent Bamulangaki Sempijja said the Jinja agricultural exhibition is focused at show-casing new and modern agricultural practices, special packages for the youth, women as well as financial institutions. He emphasized the need to adapt to modern farming practices to ensure optimum utilisation of land and agricultural mechanisation.

The President of Uganda National Farmers’ Federation, Mr. Charles Ogang,  said that Uganda, like other countries in the world needs to embrace irrigation so that farmers are able to practice agricultural production all the year round to mitigate climate change challenges that have been manifested in long drought spells and floods in several parts of the world.

He called on Government to subsidise irrigation equipment that is expensive for ordinary farmers. He also rooted for Government intervention to increase investment in water for production to at least a water source at the village level. He commended the President and the government for scraping taxes on saving and credit organizations adding that the measure has become a motivation factor to the population in joining SACCOs. He said that this would help to enhance the saving culture by the population in Uganda.