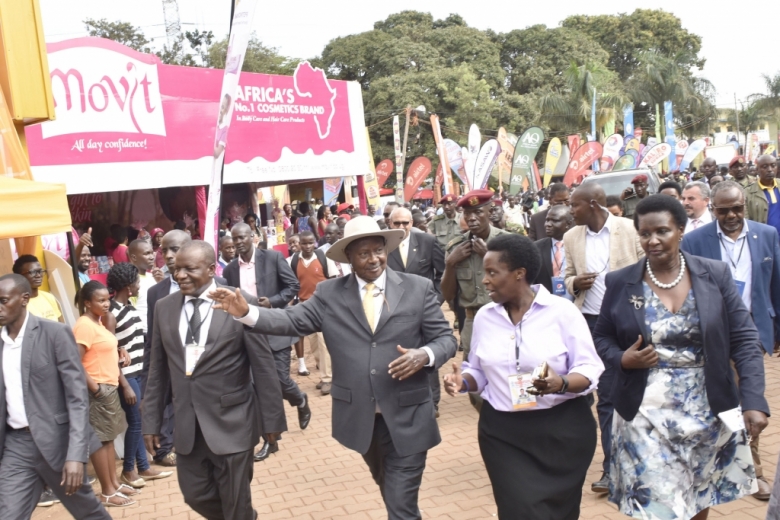 President  Yoweri Museveni has re echoed government's commitment to support the private sector in a bid to see a more vibrant economy.

" the government has no business apart from security and infrastructure but to support the private sector "he said.

He said that the government will discuss through cabinet the issue of high interest rates for manufacturers to see that it is lowered down and and affordable.

The President was speaking at the opening of the 25 th anniversary of  Uganda Manufacturer’s Association (UMA) Trade Fair Exhibition held at the UMA Show Ground in Lugogo, along the Kampala-Jinja Highway.

The international trade fair which saw an increase of 10% of participants from the previous one ,run under the them; Transforming the economy through industrialization.   While at the Fair ,the president performed the ground breaking ceremony for the construction of the monument as well as a foundation stone for the UMA founding members Jayant Madhvani and James Mulwana.

The president awarded the best performers movit products being the best 2017 exhibitor and Musa body the small scale industries among others.

He saluted the contribution of the founding members of UMA ,Madhvani and Mulwana among others for revamping the economy through industrialization.

Trade,Industry and Cooperatives Minister ,Mrs . Amelia Kyambadde thanked the President for the support he has always accorded to the private sector . she noted that there has been a positive growth as far as market penetration is concerned. She said her ministry is engaged in a number of policies such as Buy Uganda Build Uganda ,rural industrialization policy as well as efforts to revamp the cooperatives .

UMA Chairperson Ms. Barbara Mulwana thanked the president for finding time to celebrate with UMA. She said that UMA is involved in various activities such as promotion of health living , training and promotion of small scale industries among others