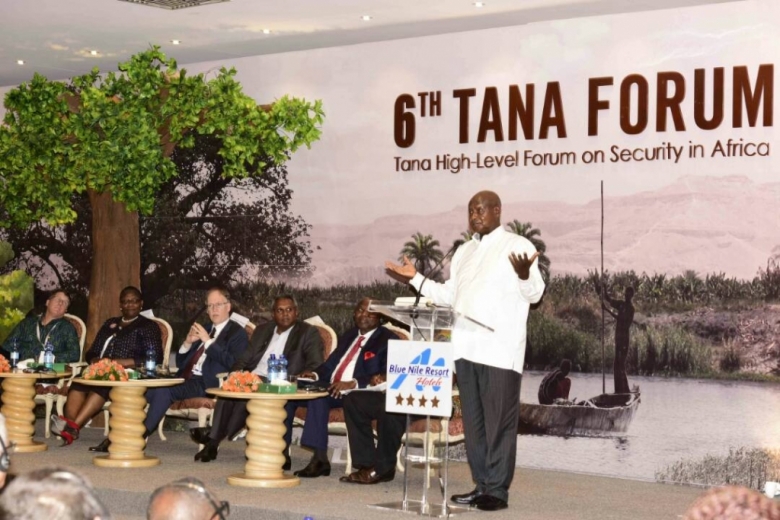 President Yoweri Museveni has urged African leaders to stop what he described as ideological meandering and thoroughly discuss and distill positions which can help their people transform and develop using their natural resources.

Speaking at a discussion on “Managing Natural Resources In Africa: Challenges and Prospects,” at the ongoing 6th High Level Forum on security in Africa at Blue Nile Hotel, Bahir Dar in Ethiopia, President Museveni said while Africa is at a structural disadvantage in that great ideas do not apply to the whole of Africa, the Tana Forum can still spread the ideas through ‘osmosis’.

“Africa has a structural disadvantage. We are not like China. In China when there is one good thinker…the whole china follows them. Here, you may have good ideas in Ethiopia but they are localized and do not apply to the whole of Africa. This forum can help ideas spread by osmosis,” he said.

President Museveni who disagreed with some of the presenters who said education was the solution to solving Africa’s problems said policy mistakes by both technocrats and political leaders have led to various problems in Africa.

“We in Uganda have identified 10 strategic bottlenecks and our view is that they all must be handled together. These include ideology, state formation, infrastructure development, market integration - If I produce but do not have enough buyers, how will I benefit," he said.

Therefore President Museveni urged the forum to focus on who owns the natural resources on the continent.

“On issue of mineral resources, my question is who owns the minerals. With petroleum we have production sharing agreements (PSA) where the company which has exploration licenses agrees with government to pay so much to regain what they invested and the rest is for government,” he said, adding that, it is not clear what the case is with other minerals including where companies own minerals but governments have loyalties.

“In Uganda, am not bothered with minerals because Uganda has been developing at a good rate depending on agriculture and industry. We discovered petroleum about 12 years ago but up to now we have not exploited it because I could not agree with those companies. They wanted to cheat us. I said no, the petroleum has been in the ground for the last many years it can stay there until we agree. That is because in my view, minerals should belong to the country,” he said.

President Museveni also emphasized locally based value addition for countries to fully exploit their natural resources for the benefit of their people.

“We have got huge reserves of iron ore in Uganda. Indians came and said they want to export soil to India and process it there. If they take as soil, they would pay US$38 per tone. Our iron ore is 70% pure, one of the best in the world, only second to Peru. When steel prices are high instead of US$38 per tone, you get US$900. I said nobody will take an ounce of iron ore from Uganda until we agree.. up to now its still in the ground,” he said.

The President said the government agreed with the Chinese to process locally the lover version magnetite which they are using to produce steel.

On Petroleum, President Yoweri Museveni said various companies tried to convince Uganda to export its petroleum from abroad and where discouraging the country from building an oil refinery saying it was not economically productive.

“I was told Uganda does not need a refinery because it was not productive and not economic that means those with refineries are Mother Theresa's working for nothing. I went to Iran and asked how many refineries they have and they said they got 9 and building another 6. I said no refinery no oil. It is still in the ground until we agree,” he said.

President Museveni who spoke passionately about processing Africa’s minerals from Africa to create jobs and get more value from their resources said it was foolish to give your neighbor firewood when you don’t have firewood in your house.

“We have a lot of Uranium. Canadians came and said they wanted to take to Canada to process it from there and I said it will stay in the ground until we build own nuclear power station because am not a fool to give firewood to my neighbor when I don’t have firewood in my house,” he said.

The President said it takes good ideas to spread on the continent to consolidate its gains and urged all Africans to come together and achieve this.

“I love Trump. I love that man Trump because that man has told you that he is not your uncle. And I think it is good. For those Africans who feel orphaned, am sorry for them. Let’s come back to our continent and mind our own affairs,” he said.