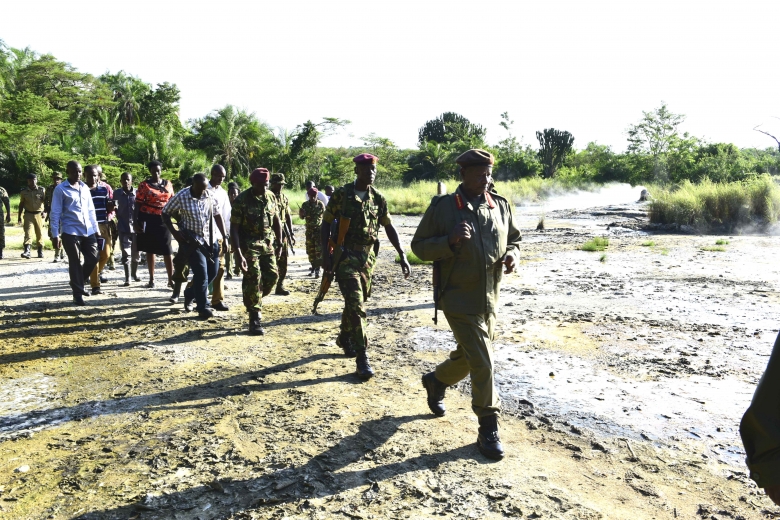 President Yoweri Museveni, who is currently in the Rwenzori Sub-Region in Western Uganda on a security assessment tour, has directed for immediate increased deployment of the Uganda People’s Defence Forces (UPDF) and the Police Force in the border district Bundibugyo after complaints from the people of the area about the deteriorating security situation in that district.  The President, accompanied by the First Lady Hon. Janet Museveni who is also Minister for Karamoja Affairs, arrived in the region yesterday and went up to Lamia border post on the Uganda/Democratic Republic of Congo (DRC) border. He addressed hundreds of people, both Ugandan and Congolese nationalities and also made inquiries and interacted with the people on the security situation at the Uganda-DRC border point and the neighboring areas in general.Although not many complaints were raised on the border security, Congolese nationals petitioned President Museveni to prevail over Uganda immigration officials who stop DRC nationals from freely crossing into Uganda to do business in the country.President Museveni promised Congolese nationals that he will discuss the matter with the DRC authorities but added that he has no objection to the matter since Congolese and Ugandans are the same people.“Ugandans and Congolese are one people with the same heritage and most of you at the border speak one language and are related. These are mere colonial boundaries. I don’t see why you shouldn’t work together freely,” he said.Several people that the President talked to on the numerous stopovers that he made at Busunga border town, Kabutabure Trading Centre, Nyahuka Town Council, Kayengye Trading Centre and in Bundibugyo Municipality, complained of the presence of several criminals and bandits in the region who specially come from the mountainous Rwenzori areas to terrorize villages in the low laying land areas killing people, looting their property and causing unacceptable insecurity.“It is only the towns that are peaceful but people have been terrorized and have abandoned their homes in villages to stay in towns where there is Police presence that is also not enough,” Bundibugyo residents told the President.“Wrong elements have even disconnected the water supply system from the mountains cutting water supply to Bundibugyo Town,” the Resident District Commissioner of Bundibugyo, Mucunguzi Geoffrey told the President.President Museveni, who was accompanied by the UPDF’s 2nd Division Commander, Brigadier Peter Erweru and the Rwenzori Regional Police Commander, immediately directed the UPDF and the Police to increase their forces in Bundibugyo in order to ensure that peace, security and sanity is restored in the district without further delay.“That’s why I came here. I have heard your security concerns and I have directed the Army and the Police to deploy heavily and ensure peace and security returns and people go back to their homes. We can’t entertain banditry and we can’t negotiate with bandits. They either come out or we shall get them out of their hide outs,” he said.Earlier, President Museveni made a brief stop at Sempaya tourist site and toured Nyansimbi hot springs in Semuliki National Park. Mr. Rukiza Moses, a ranger at the Park, conducted him on the tour of the hot springs.Rukiza told the President that the waters at the hot springs offer one of the most prominent tourist attractions in Semuliki National Park and boil up to 97 degrees. He also told him that the hot spring of Nyansimbi is historically known to be the ancestral origin of the Bamaga clan of the Bamba tribe of Bundibugyo district.According to Rukiza, due to the importance that the clan attaches to the hot spring, the Bamaga clan members visit the hot spring annually in the month of November to seek blessings for their children, for wealth and many others supplications. The President commended the Uganda Wildlife Authority (UWA) workers at Sempaya tourist site for their good work in the tourism sector in particular and to the country as a whole. ENDS