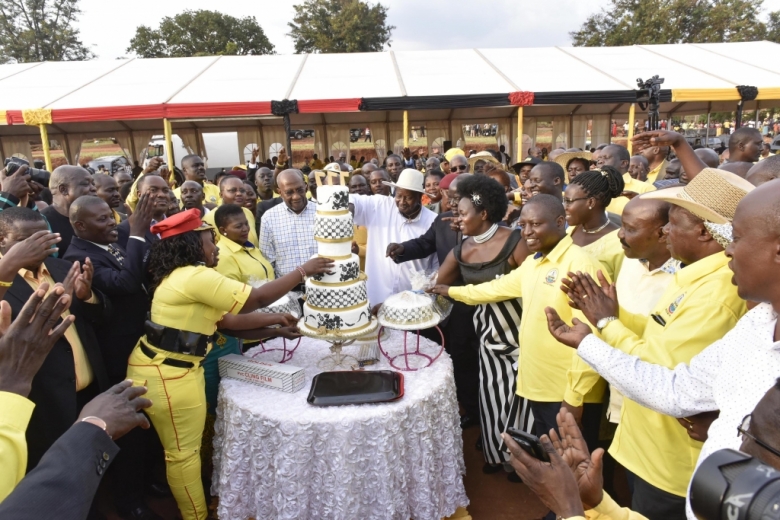 Joined the people of Kiboga District and the entire NRM party leadership for a thanksgiving and celebratory ceremony organised by the NRM Chief Whip, Hon Ruth Nankabirwa.

I thank the people of Singo, which includes Mityana, Kiboga and Kyankwanzi districts, and also the wider Bulemezi area for their unwavering support of the NRM.

You supported us in Bush Struggle and have continued even after we captured power. Good enough, the NRM has not let you down. We have ensured Uganda is peaceful. Anyone thinking of destabilising this peace is safer committing suicide because it cannot happen.

What we have experienced lately is urban crime but we are fighting it. The government will soon install cameras in major towns and highways to ease the work of police, especially in evidence gathering.

The NRM Government has also done a lot on the development front. Previously, the areas of Kiboga and Mubende were like islands with tarmac roads skirting around them. There was tarmack in Masaka, Mpigi, Bomb and Luweero but not here.

However, one can now move on tarmac from Nansana, Bus unjust to Hoima through Kiboga. We are also working on the Masindi-Hoima-Kagadi-Fort Portal road. You will move on tarmac to the South Sudan border.

I am glad that the LC5 chairman in his report indicated that the Operation Wealth Creation programme has been helpful in Kiboga District. Every Ugandan must work towards creating wealth and persevere even when they meet challenges.

And unlike development, wealth is a personal endeavour. There are four broad areas in which wealth is achievable; commercial agriculture, industries, services and ICT. Every Ugandan must be involved in at least one of these.

Recently, the government evicted artisanal gold miners from Mubende District. This is because they were mining gold and spiriting it away in raw form to foreign countries, in the process denying government revenue but also killing jobs.

There is a gold refinery in Entebbe now and it was set up to ensure we add value to gold before it is exported. We should not sell our unrefined gold on the black market. A more organized gold industry will mean more revenue for government but also clear, documented jobs for our people.

The same philosophy informed my rejection of the notion that Uganda should export crude oil to foreign markets for refining before it returned here as finished products. We are not fools to let this happen. Uganda will build a refinery and once complete, we shall stop importing fuel and its byproducts.

It is the same case with Kilembe Mines, where I am now insisting copper purification must be at 99% as opposed to the previous 94% to enable our companies here like Cable Corporation in Lugazi to produce finished products.

On the question of land, I ask you to be calm. I have been hearing lots of misinformation. Do not be misled. It is us fighters who brought back this peace and order. In the Bush we had landlords and squatters both supporting the NRA. No one appreciates the best interests of these groups better than us.

Finally let me thank the NRM legislators who recently amended the Constitution. They are the new historicals. We responded to the opposition who were provoking us with threats of "Kogikwatako".

After the amendment, business people rang me to say they would invest more because they are assured of flexibility. Ugandans can now look at the whole menu; young, old, and pick their leader. I thank the NRM CEC, NEC, Caucus, district conferences, etc for ensuring we have a flexible constitution. I thank you.