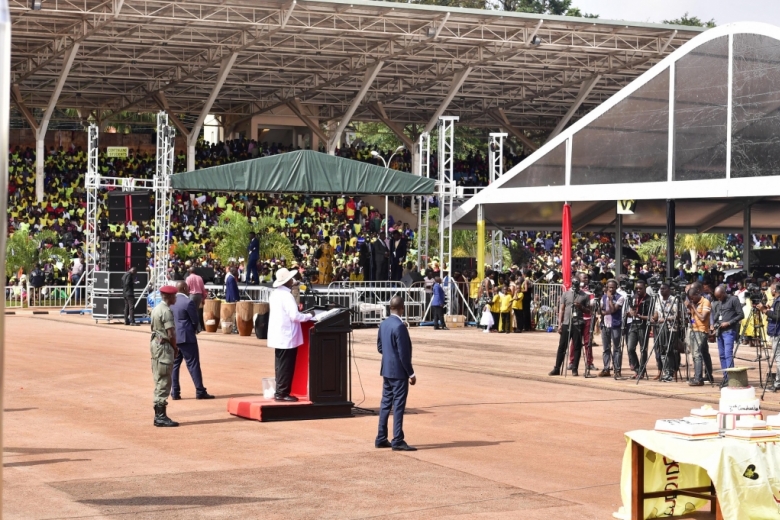 President Yoweri Museveni has advised girls that have been skilled in a variety of trades to use the vocational skills that they have acquired from their training to meet the needs of people, which in turn, will make them wealthy and prosperous.

The President was speaking at the graduation ceremony of 8480 female graduands who have benefitted from the Presidential Initiative on Skilling the Girl Child of the July- December 2018 intake who successful completed their training and obtained skills in bakery, hair dressing, knitting, tailoring and shoemaking. They were drawn from the areas of Kigowa, Mutundwe, Luzira, Wandegeya, Nakulabye and Katanga in Kampala District.

The colorful ceremony was punctuated by singing, dancing and all sorts of celebrations from the jubilant graduands and their families who thanked President Museveni for skilling them.

The President, who earlier toured different exhibition stalls, said that Africans must stop taking jobs and money abroad because they have the capability to work here and became rich.

“Africans go and look for jobs outside yet we have the best weather and resources. People in dry places like Dubai are manufacturing things and making money. This is a sample. We are going to continue supporting such programmes such that we don’t take our jobs and money abroad,” he said.

President Museveni also noted that the youth must endeavor to train and acquire new skills like making cement blocks, oil from sim sim seeds and pavers from stones, among other new skills.

He reiterated his plan of forming Savings and Credit Cooperative Organizations (SACCOs) of the same skill-set in various districts in the country to enable them become prosperous.

In her brief remarks, the Minister for Kampala City Authority, Hon. Betty Kamya, thanked President Museveni for reaching out to the needs of wananchi and for reducing the burden on parents who have to pay tuition for students.

The in charge of the Presidential Initiative on Skilling the Girl Child, Mrs. Lucy Nakyobe Mbonye, who is the State House Comptroller, advised the graduands to apply the skills learnt and make money as it was the objective of the project. She added that it would be a waste of money if they did not work.