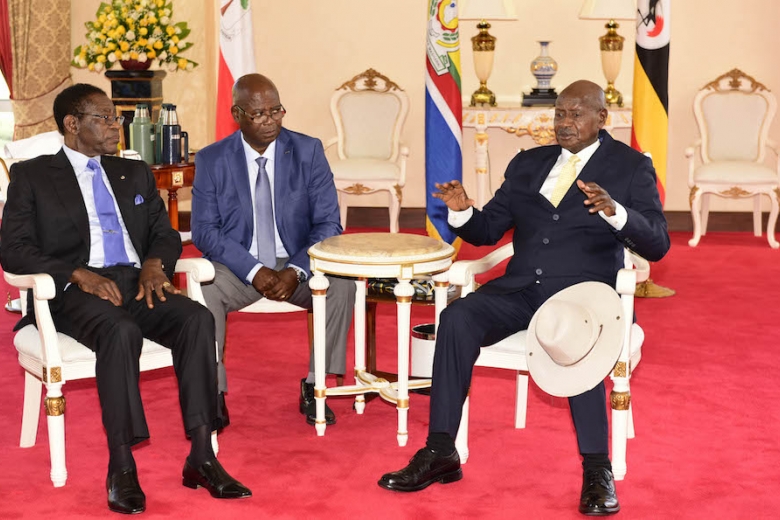 President Yoweri Museveni has received President Teodro Obiang Nguema Mbasogo of Equatorial Guinea at State House, Entebbe at the start of a 2-day official visit to Uganda at the invitation of his Ugandan counterpart.

President Obiang Nguema Mbasogo who is the official African Union (AU) Champion of 2019 on finding solutions to forced displacements in Africa, is slated to tour Kiryandongo Refugee Center Settlement in Bunyoro Sub-Region to get first-hand experience on how Uganda has successfully handled the refugee crisis.

In a tete-a-tete between the two leaders, President Museveni thanked President Obiang Nguema Mbasogo for the visit in order to highlight the crucial issue of refugees. He noted that Uganda did not have political problems with refugees because of the country’s Pan- Africanism orientation.

“Our tribes here are interlinked right from Congo, Rwanda and Burundi. The only challenges that we face now are to do with mainly logistics,” he said.

Commenting on one of the biggest causes of the refugee crisis as being terrorism, President Museveni noted that it all started with the politics of identity, which created sectarian parties and in the process fragmented them. He added that Africans must desist from such because it fuels the refugee crises.

President Obiang Nguema Mbasogo appreciated President Museveni and Uganda for opening up the borders to accommodate different nations’ citizens fleeing from war. He encouraged other African countries to emulate Uganda.

“I am here to be able to see face to face how the refugee settlements run and how the policies operate. It is very difficult to eradicate the issues of refugees because of things like terrorism but we must do our best,” he said.

He added that Equatorial Guinea was planning to organize and host what he called the ‘Silence of Arms’ Conference in March 2020 to advocate for illegal arms restriction.