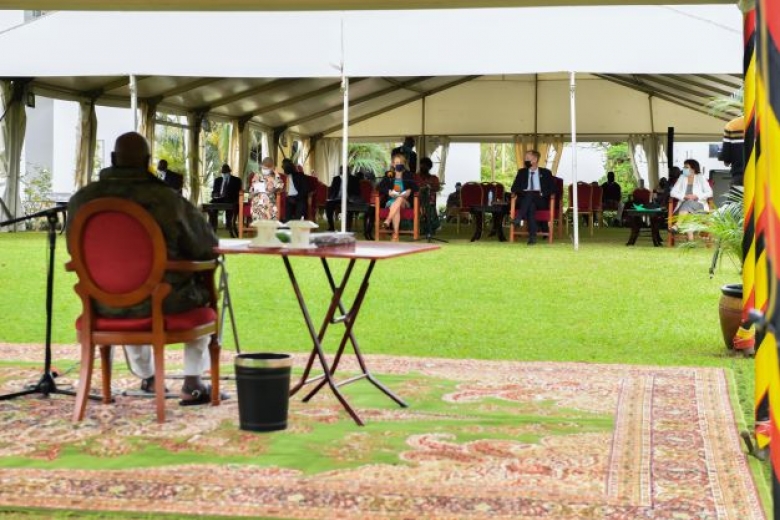 President Yoweri Museveni has called for stronger collaboration with partners in the development of vaccines and said building a strong pathogenic economy will not only promote human and animal health but will also make money and help the economy to recover post COVID19.

The President was meeting envoys from the Nordic countries led by the Norwegian Ambassador to Uganda Her Excellency Elin Johansen, the Danish Ambassador to Uganda Nicolaja Hejberg Petersen, that of Sweden Maria Hakansson and the Charge de Affairs of Iceland Thardis Sigurardottir. The President and his guests discussed challenges related to Covid-19 and the economy, Covid-19 vaccines roll out capacity ahead of schools reopening, regional peace and security

“We are also developing our own vaccine. The pandemic has shown us the dangers of dependency. Those with the reagents like beta-Propiolactone used for vaccines were reluctant to sell. When we went deeper, we realised that we could make it here from Ethanol.

Please tell your countries to sell us the reagents in the medium term and cooperate with us in making the vaccines, he said.

He urged the development partners to help build a pathogenic economy for Uganda and promote human health and financial growth.

“Help us build a pathogenic economy. It is for health and money both for humans and animals. In this way, the economy will recover. The only problem will be companies with debts owed to banks which are the most vulnerable,” he said.

The President said while the government may use political pressure to stop banks from selling clients property, there is need to pay back the loans.

“There is some structural problem. How do we support these companies? We may have many companies going bankrupt. If there are soft loans put in UDB it will help them recover. Farmers are affected by schools and Hotels closing because nobody is buying their produce, but they will manage,” he said.

Responding to concerns by the development partners that while the vaccines are coming in, the vaccine in-take is slow, the President said they aim at vaccinating 21 million people by the end of December and pledged to mobilize the elderly people aged 50+ so that they can quickly get their jabs and ensure their good health.

He tasked the Ministry of Health to work out a written plan for mass sensitization with the partners. He also said he will address the nation next week to urge Ugandans to get vaccinated.

“Previously, the message was don’t move, but now, we must encourage the people to come to the Health Centres because the solution is there,” he said.

On the issues of regional peace and security, President Museveni said some of the ADF and ISIS rebels have linkages and many have been arrested while transiting. He disclosed that Uganda today is hosting over 400,000 Congolese refugees who are victims of insecurity in the neighbouring country and that over 700,000 people were displaced due to disturbances in Mozambique.

“The Security Council should hold bilateral and multilateral engagements and emphasize that Eastern Congo is a breeding ground for these groups in a weak country. It is a problem of a vacuum created by ideological disorientation,” he said.

On the issue of Climate Change, the President urged the development partners to help deal with micro issues of Climate change including preserving wetlands, forest reserves and ridding steep gradient mountains of settlements to stop landslides.

“Help with wetland and forest reclamations and recovery of steep gradients. We need money for encroachers to leave peacefully by giving them alternative livelihoods,” he said.

The Norwegian Ambassador H.E. Elin Johansen who led the delegation expressed their interest in cooperating with Uganda in fighting the Covid pandemic, regional issues and issues of climate change. She said that they were keen to know Uganda’s challenges especially in its efforts to fight against Covid.

The envoys looked forward to continued good relations between their block and Uganda.