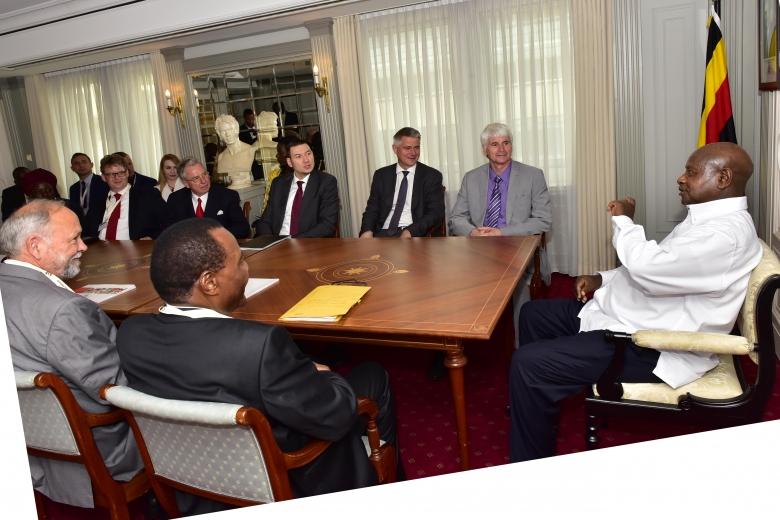 President Yoweri Museveni, now in the German capital Berlin has urged German investors to come and participate in the growth of Uganda’s expanding economy, saying that this is the right time and Uganda the right place because of the big East African market and  vast profitability opportunities now available.

The President was delivering a key note address to the German-African Business Day Forum 2016 taking place at the Ellington Hotel in Berlin this morning.

“Business is not charity. It is about profitability through providing quality goods and services to the consumers.  I am, therefore, here to show you that Uganda is the right place to go as far as investments are concerned and that, it is the right time to go,” he said.

“The two crucial elements in business are the producers and the consumers.  All the major global economic developments and metamorphosis in the last 300 years have been triggered and sustained by these two actors - the consumer and the producer,” he said.

He identified abundant and cheap electricity, efficient and cheap road and railway transport, piped water, and a modern ICT backbone and under sea internet as vital infrastructures  necessary for investment.

Museveni said Uganda’s economy has been growing at 6.6% for the last 20 years without adequate electricity, poor road and railway transport infrastructures but with the surplus electricity obtaining today and the improved transport  system the growth rate will be more than double.

President Museveni invited them to come and participate in agro-processing mineral beneficiation to make still from the abundant iron ore deposits and other minerals such as gold wolfram aluminum and phosphates for fertilizers. He also identified the packaging, the textile and leather industries as best for investment.

On tourism, the President said that Uganda’s geographical location was unique in the whole world except for Kenya and Equardo.

It lies astride the equator but with high elevation and a lot of varied biodiversity providing ample food for agriculture and conducive climate  all the year round.

He also explained to them the country’s investment policy that covers tax holidays and industrial parks adding that global prosperity is dependent on investment, trade, and tourism.

The President invited German industrialists and other entrepreneurs to come and preach the gospel of prosperity through investment and job creation.

The German Minister for Economic Cooperation and Development Mr Gerd Muller welcomed the President and encouraged German entrepreneurs to invest in Uganda and share their experiences and skills with Africa now that it is the fastest growing continent.

Later the President met Chairmen and Chief Executive Officers of the various concerns participating and these intending to participate in the Ugandan economy at his Residence at the Westin Grand Hotel in Berlin.