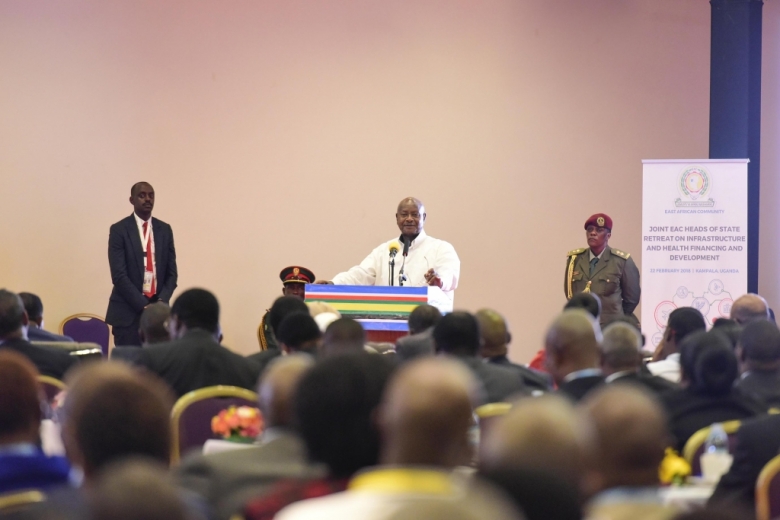 President Yoweri Museveni has called upon fellow Heads of State of the member countries of the East African community (EAC) to continue on the path of connecting the region and internal investment in infrastructure in order to boost production and productivity.

Presidents Uhuru Kenyatta of Kenya, Joseph John Pombe Magufuli of Tanzania and Salva Kiir Mayardit of South Sudan attended the retreat. President Paul Kagame of Rwanda is being represented by the Minister of Infrastructure, James Musoni, while President Pierre Nkurunziza of Burundi is represented by the 1st Vice-President, Martin Nduwimana.

“I would like to also request all partner states to focus onto the challenge of doing business in order to realize value for money for the investments we make in infrastructure. This is an area we must address collectively,” he said.

President Museveni said that whereas developed countries anchor their infrastructure development on their strong financial and capital markets, East Africa lacks such muscle and, hence, misses the opportunity to access sufficient and cheaper capital.

He further explained that East Africa needs to embrace the infrastructure bonds issued through vibrant financial markets that have become feasible and profitable investment portfolios for emerging countries in South East Asia in order to realize its long-term infrastructure development goals.

On health, President Museveni said that although the East African Community has witnessed a notable increase in life expectancy from 51 years in 2005 to 61 years in 2016, huge public health challenges still exist.

President Museveni said that EAC must deliberately re-focus its efforts to address these challenges through increasing investment in prevention, human and technological resources to accelerate progress towards universal coverage of essential health to the people of East Africa.

“With the current array of technologies at our disposal, there is no reason why we cannot eliminate some of the public health challenges such as Malaria, Tuberculosis, HIV and AIDS; preventable maternal and child deaths. We are also better equipped to deal with non-communicable diseases and epidemics,” he said.

The President also called upon investors and development partners to take advantage of potential investment opportunities such as the high unmet needs for specialized healthcare of the rapidly growing population; growing middle class and a wide range of potential incentives offered by partner states.

“We expect the health sector to contribute more significantly to the economy through creation of new jobs, proliferation of innovations, expansion of manufacturing of medicines and health technologies and medical tourism. The sector should be a foreign exchange earner to the region,” he observed.