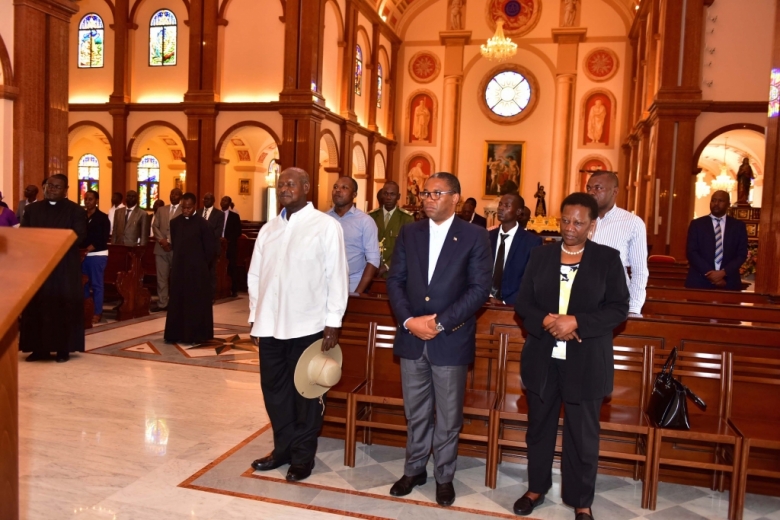 President Yoweri Museveni has wrapped up his third day of his State visit to Equatorial Guinea with prayers at the countrys’ largest Church, the Basilica of the Immaculate Conception of the Virgin Mary.

The prayers led by Bishop, Monsignor Juan Domingo Beka Esono Ayang where held shortly after the President was taken on a tour of the Basilica.

“Praised be the Lord. Congratulations to the people of Mongomo for building this Basilica for the Lord,” the President wrote in the Basilica register at the end of his visit.

The Basilica of Mongomo is currently the largest religious building in Central Africa and the second largest Catholic Church through out Africa after the Basilica of Our Lady of Peace in Ivory Cost.

The Basilica is dedicated to Immaculate Conception, Patroness of Equatorial Guinea

Initially President Yoweri Museveni was taken on a tour of Equatorial Guinea “City of the Future” to which the country is shifting its capital from Malabo. The city with complete transport, education and administrative infrastructure is located in Wele-Nzas, between the cities of Bata and Mongomo and only 20 Km away from the new Mongomeyen airport. The national road network will serve the city. Djibloho is characterized by the dense equatorial forest that surrounds it and by the strong presence of the river Wele.

In Mongomo town, President Yoweri Museveni, accompanied by his host President Nguema Mbasongo paid a courtesy call on the town Mayor Mr. Santiago Eneme Ovono at his office in Mongomo. The President was presented with a gift of a relic gun and a key symbolizing great leadership

The President was later hosted to a luncheon by President Teodore Nguema Mbasogo at the Leaders Club, inside the Presidential Palace in Mongomo.

Mongomo is a hometown of President Nguema Mbasogo in Wele-Nzas Province in mainland Equatorial Guinea on the eastern border with Gabon.