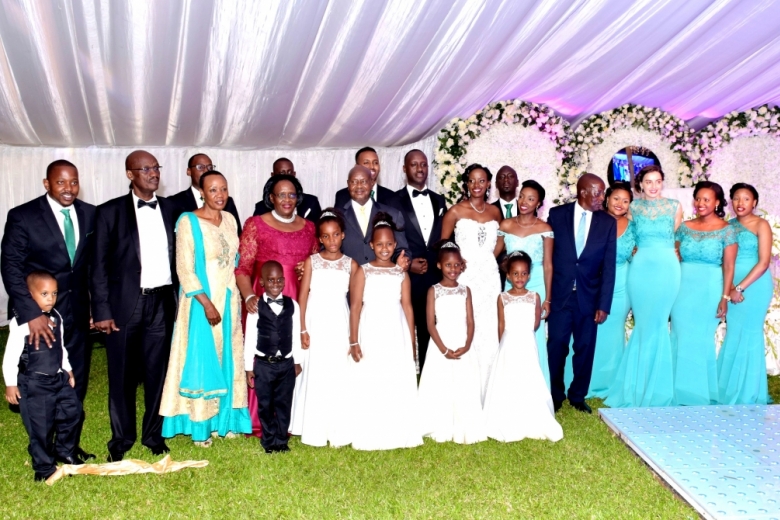 President Yoweri Museveni has commended freedom fighters for their role in liberating Uganda.

The President made the remarks during the wedding reception of Mr. Arnold Akandinda Kazoora and his bride Ms. Kobusingye Kukunda Mushega. The reception was held at Mawanda Gardens in Kireka, Wakiso district.

The groom is the son of Hon. John and Mrs. Naomi Kabasharira Kazoora of Rutooma Kashaari County in Mbarara district while the bride is the daughter of Hon. Amanya and Mrs. Alex Mushega of Bumbaire Igara County in Bushenyi district. The fathers of the groom and that of the bride respectively are known freedom fighters that participated in the protracted armed people’s struggle in the 1980s.

“The people who were being despised played a big role in liberating Uganda. Kampala City has been built all the way from Entebbe through Kampala up to Kireka. It has become one town. These fighters enabled it to develop to this stage. Their children and the youth at large will streamline it,” remarked the President.

Mr. Museveni thanked the Kazoora family for inviting him to the wedding ceremony and informed guests that Hon. Amanya Mushega, as a Political Commissar, did a good during the protracted armed people’s struggle that entailed sensitizing wananchi.

The President noted that people of Rutooma in Kashaari County where Hon. John Kazoora hails from are pioneers in the promotion of education. He further informed guests that Kazoora who was in Kyamusisi in the Luweero Triangle received the youth who were joining the struggle.

President Museveni expressed happiness to note that children of the freedom fighters have matured and received education. He used the occasion to remind the guests in particular and the whole country that the freedom fighters in Uganda sacrificed a lot to make Uganda to enjoy the prevailing freedom and peace that Ugandans relish in.

Mr. Museveni observed that in life and at different stages, people may disagree but added that that should not discourage them. He said disagreements should not be the end but could serve to communicate and resolve differences. He told the attentive guests that the newly wed couple, had, through their matrimony, formed a forum for him, Hon. Kazoora and Hon. Mushega to get together. The President donated 10 cows to the new couple in appreciation of their new step in starting a family.

President Museveni, therefore, called on the freedom fighters that are in the opposition to return so that, together, they may achieve what was pending because there are still tasks that need to be performed. He noted that through the achievements of their children, freedom fighters in the country have resurrected. He, therefore, congratulated newly wed couple, Arnold and Kobusingye, upon their achievement in the holy matrimony.

Turning to development, President Museveni told the guests that the National Resistance Movement (NRM) Government has 4 principles, namely Patriotism, pan-Africanism, Socio-Economic Transformation and Democracy. He assured the wananchi in Uganda that the Government is committed to the struggle of eradicating household poverty.

He strongly advised the people of Kashaari as well as other areas of the country to fully embrace the Government policy of poverty eradication through the promotion of the Government projects that are entailed to boost household incomes. He said this could be done through the commercialization of agriculture. He urged them to grow coffee and rear dairy cows.

He equally called on the Igara community in Bushenyi district to put in more efforts in tea and coffee production, among others, to improve further household income of wananchi.

President Museveni used the occasion to warn the people in Uganda against land fragmentation that is usually set in motion after the death of family heads. He called on the religious and other civic leaders to sensitize wananchi about modern methods of inheritance adding that people should only share the proceeds accruing from consolidated pieces of land as a means ensuring that land is not fragmented into uneconomic units on account of archaic inheritance practices.

The father of the groom, Hon. John Kazoora and an Old Boy of Nyakasura School in Fort Portal, requested President Museveni to assist them revitalizing the school. He saluted him for his presence at the reception and noted that when they were in the bush they were united.

The groom, Arnold Kazoora, saluted President Museveni for honouring the invitation to their wedding ceremony. West Ankole Diocesan Bishop, Rt. Rev. Johnson Twinomujuni, on behalf of the Kazoora family, thanked guests for their love. While noting that marriage is a journey of 2 people in love, the Bishop urged the new couple to fear and respect God.