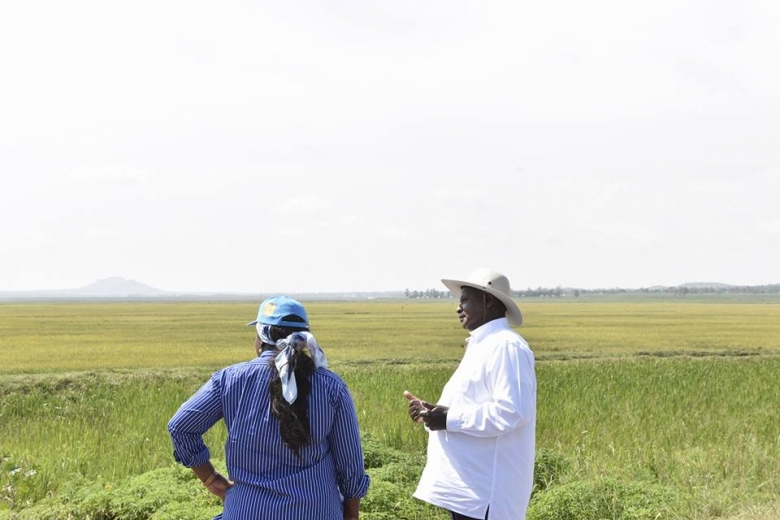 President Yoweri Museveni has opened a war on environmental degradation, walking over three kilometres across Mpologoma swamp and bridge as the sunset in Eastern Uganda. To highlight the problem, the President invited along Ms. Rosa Malango, the United Nations Resident Coordinator and Resident Representative for the United Nations Development Programme (UNDP), to support efforts by government to reclaim degraded swamps.

The President, who made on spot visits yesterday; first to Kaliro district, then to Namakoko swamp in Namutumba district and later a marathon walk across River Mpologoma on the Iganga-Tirinyi-Mbale road, said the country needed to put on new spectacles to address the issue of drought and starvation that are causing death and destruction.

The President, who toured Kaliro and Namutumba districts, used anecdotes to highlight the gravity of the problem. He said as the country was pushing the development agenda including roads, electricity, schools, health facilities alongside the campaign for Wealth Creation for poverty eradication, he got a call that drought has affected crops and the changing climate seasons and little rains have caused destruction.

“When you go to the bush and a small stick hits your eye, it is telling you to see properly. This drought and hunger are the stick telling us to see properly,” the President said urging communities to restore granaries to store food, grow drought resistant foods and engage in commercial agriculture for both food security and incomes. He said this will help them save. He said foods like cassava and millet can be stored comfortably to fight hunger. He also urged Ugandans to engage in cost effective enterprise selection and mix to maximize profits by growing things like fruits, coffee and engaging in improved animal and crop breeds. He urged them not to fragment their land as it loses value.

According to the President, the drought is from two things; 60% of our rain comes from China and Indian Ocean winds. Rain from the oceans is little this season and the cold currents reduced the amount of water. 40% of the rain comes from our local resources like Lakes Victoria, Kyoga, Albert, George, Edward etc and from the wetlands.

“People started invading wetlands and planting rice, maize and making farms like in Kigezi and Ankole. Even the 40% of our water sources are affected. That stick is hitting us in the face. We need to see properly now,” he said.

The President, who was addressing a rally at Iwungira Primary school playground in Ivukula County in Namutumba district, said government intends to install solar water pumps at water sources to pump water into reservoirs and serve the communities instead of letting people invade the swamps in search of water.

“We need to sit and agree on how to reclaim swamps. People are drying up swamps. If the swamps are dry, where shall we get water to pump? When God was creating these wetlands, He knew the reasons why and now people who are settling there are saying God did not know what He was doing. We are now seeing the consequence. I want to forgive those who invaded swamps. Government was lazy; it was not engaged in serious agriculture so people went to the rivers to find water. Now we shall use science and get water from the rivers to the people and also encourage irrigation, mulching and improved animal and plant breeds,” he said.

The President said to mitigate the current drought and hunger situation, government will suspend some road projects and divert money to procure things to help the people.

“People can’t die of hunger and we focus on roads,” the President said before handing over relief items of 600 bags of maize flour (Posho) and 300 bags of beans to the district leadership in Namutumba. He emphasized that the elderly and less abled people be the priority to get food aid.

Ms. Rosa Malango said she accompanied the President to see what is happening with the food security situation and the wetlands and to share areas of cooperation.

According to reports, drought has plunged East Africa into the worst food security crisis Africa has faced in 20 years. More than 11.5 million people are currently in need of food aid. In Uganda, Finance and Economic Planning Minister, Matia Kasaija, is quoted as saying the ongoing drought in several parts of the country is the largest threat to the projected growth in the economy of five percent.

The President was accompanied by the State Minister for Lands and Member of Parliament for Bukono County, Princess Namuganza Persis, and that of Disaster Preparedness in the Prime Minister’s Office, Hon. Musa Echweru and other senior government officials. ENDS