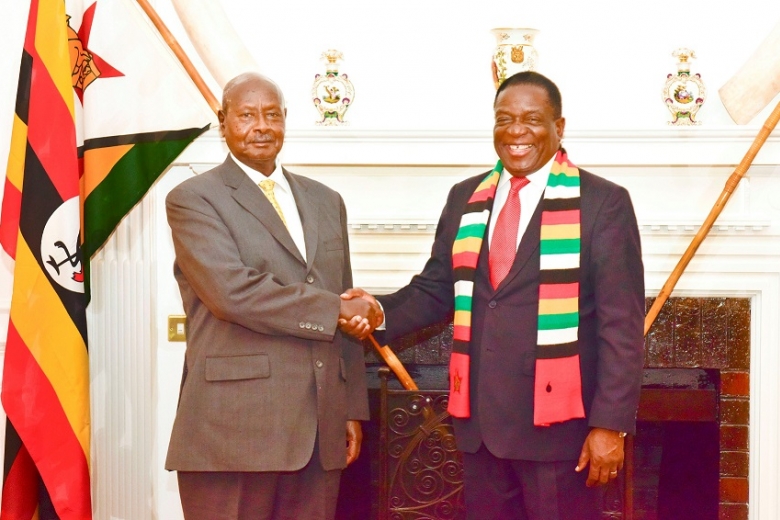 President Yoweri Museveni has said that Uganda and Zimbabwe should emphasize economic cooperation through market integration to enable our people stand on their own feet.

“We should emphasize economic cooperation. We should enable our people to stand on their own feet. One of the 10 strategic bottlenecks is market integration. Zimbabwe and Southern Africa at large have got a good potential to trade with East Africa and empower our people economically,” he said.

The President observed that the standard gauge railway will work as a stimulus to promote trade between East Africa and Southern Africa.

He made the remarks yesterday at Zimbabwe State House in Harare during a dinner that was hosted in his honour by President Emmerson Mnangagwa and the First Lady Mai Auxillia Mnangagwa. President Museveni is on a two-day official visit to Zimbabwe at the invitation of President Mnangagwa, during which he will be the chief guest at the 60th Zimbabwe International trade fair in Bulawayo that he will also officially open today Friday April 26, 2019.

President Museveni proposed that a joint commission be established with the task of promoting economic cooperation between Uganda and Zimbabwe. He observed that Uganda and the Southern African countries have got historical relations particularly from the days of liberation in the various countries including the war against the Idi Amin regime, noting that the African people are one. He thanked his host for inviting him to be the guest of honour during the trade fair. The President proposed a toast for the health of President Mnangagwa and the people of Zimbabwe.

President Emmerson Mnangagwa thanked his guest for accepting his invitation to be the guest of honour at the fair and said the visit reaffirms the fraternal bond between Zimbabwe and Uganda.

“We are rejuvenating our country and our target is to revive our national economy. We are working to modernize our infrastructure,” he said. He applauded President Museveni for his stand to fight for the removal of sanctions imposed on his country.

President Mnangagwa said that Zimbabwe and Uganda share common views affecting security within the African continent. He said that there was need to harmonize the growing economic blocks in Africa. He said that they were determined to protect and empower their people especially the youth and women.

He proposed a toast for the continued relations, peace and prosperity of President Museveni and the people of Uganda.