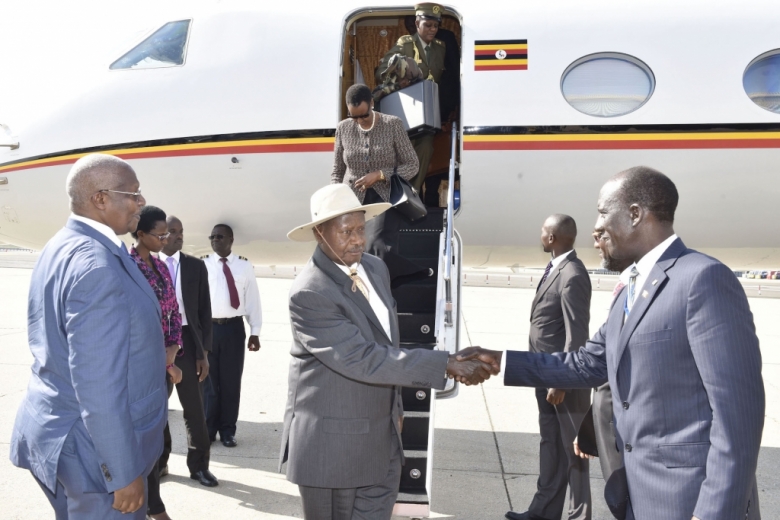 President Yoweri Museveni has arrived in New York, for the 72nd session of the United Nations General Assembly currently taking place at the UN Headquarters.

The UN General Debate will open on Tuesday, 19 September 2017 under the theme 'Focusing on People: Striving for Peace and a Decent Life for All on a Sustainable Planet.'

The President is scheduled to hold various high level engagements during his tour here ahead of his address to the UN, including a meeting with US President Donald Trump on the political Declaration on the UN reform, a high level side event on Accelerating Efforts to eliminate Child Marriage in Africa by 2030 hosted by President Edgar Lungu of Zambia and a circle of leadership High level meeting on the prevention of sexual abuse and exploitation hosted by the UN Secretary General Antonio Guterres.

The President will later hold a bilateral meeting with Mr. Guterres before addressing the Uganda Investment Conference of about 200 participants.

In his opening statement, H.E Miroslav lajčák, president of the 72nd session of the UN general assembly, said the 72nd Session will be a year of “firsts”.

“We will negotiate the first intergovernmental compact on migration. We will receive the first report from the Secretary-General, and convene the first high-level event, linked to the landmark resolutions on Sustaining Peace, which were adopted last year and soon many states will sign the first agreement on the elimination of nuclear weapons, as well as the first international compact to eliminate sexual exploitation and abuse in peacekeeping”.             He however added that it will also be a year of follow-up.            “This will arguably be even more important. “Firsts” bring photographers and celebrations. Follow-up often comes with challenges and complications,” he said.                               Following his election as the President of the 72nd session of the UNGA, Miroslav Lajack identified prevention and mediation for sustaining peace; migration; political momentum for the SDGs and climate; human rights and equality, including equal opportunities for genders; and quality of events organized by the Presidency as the six overreaching priorities of his tenure.