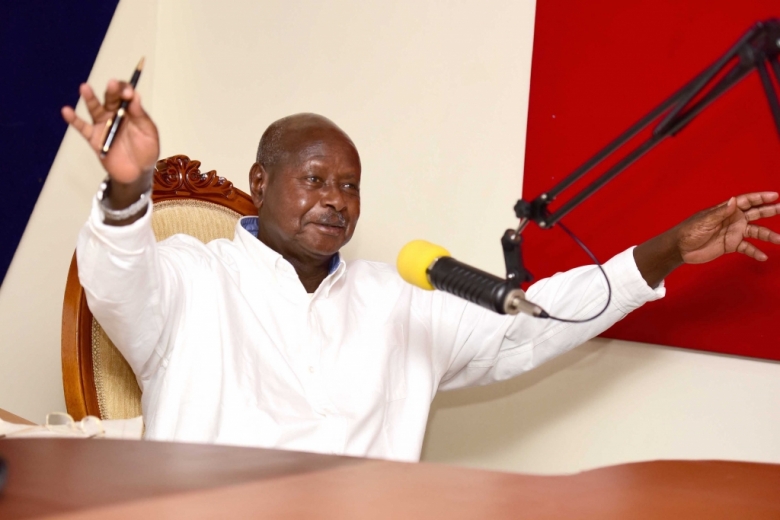 President Yoweri Museveni has challenged anyone anywhere who knows that the President has stolen ‘a two acre’ piece of land in the last thirty-one years to provide evidence.

“The only land I acquired is in Bar-alegi in Otuke district, which I acquired to fight the Joseph Kony war. Now, it’s a barracks. Not only to fight Kony insecurity but also to fight the cattle rustlers from Karamoja region,” the President said.

The President who is currently in Northern Uganda to explain to the people of the area the pr0posed land amendment was last evening on a live phone-in talk show on Lira-based Unity FM to explain to the people of Lango Sub-Region in particular and Northern Uganda in general issues on land ownership, principles under which government can access land for national development. He said that he had come to the area to de-toxicate and reverse the deliberate lies that have been propagated by enemies of development alleging that the government is intent on grabbing land from wananchi.

President Museveni said that the opposition are detractors of national development who never wish the NRM to implement any development program in the country.

“The Rweikunyu – Masindi Port road was de-campaigned. It caused a paralysis in its construction and later blamed government for failing to implement the project as promised in the previous political campaigns. An individual inflated the price of a piece of land from Shs.89 million to Shs.1.2 billion in the construction of the Kamwenge – Fort Portal Road,” he observed.

The President further noted that someone, adamantly, caused unnecessary delay in the construction of Soroti road, by refusing to offer land for the road project. He said greedy people intentionally skyrocket prices in land purchases thereby causing government to lose a lot of money in compensations payments. He, therefore, reiterated: “government is not going to tolerate such incidences any longer.”

Mr. Museveni explained to the people of Northern Uganda that he had decided to transverse all regions of the country to uproot the lies of the opposition against the Government so that the public is educated and told the truth through local FM radio stations’ broadcasts.

He assured people of Northern Region that with the existing infrastructure that the government has put in place, stability and peace on top of the extension of electricity to all corners of the country, government would build fruit and cassava factories in the area. He added that the youths would be empowered with livelihood skills for economic prosperity, increase the Operation Wealth Creation (OWC) awareness to eradicate household poverty based on the four-acre land commercial agriculture.

After the radio talk show, President Museveni told a regional news briefing session that he had “come to de-toxicate the people from lies and propaganda od the opposition against the government on issues of land policy. We are saying that if one does not accept government evaluation position on a piece of land that government has identified for national investment strategy, government should take the land as a follow up on compensation goes to the Government Land Tribunal