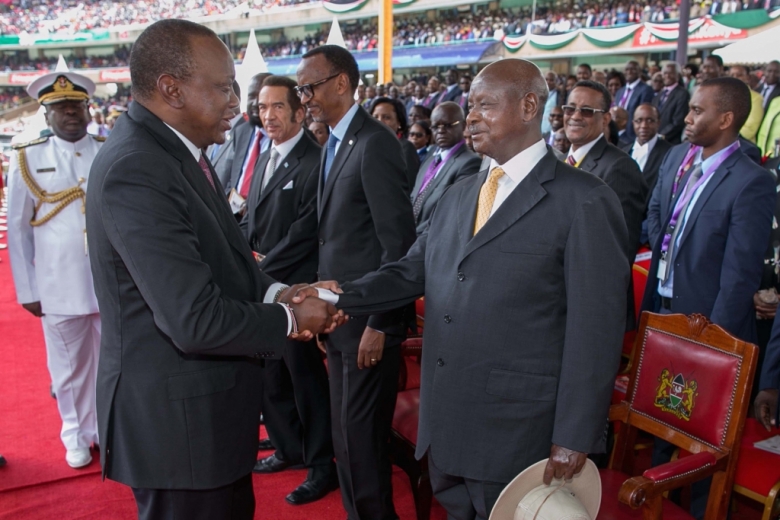 President Museveni was today among the dozen heads of state and government who attended the swearing-in ceremony of Kenya’s President Uhuru Kenyatta and his Deputy William Ruto.

President Museveni, who arrived at the Kasarani Stadium to a thunderous applause from the excited crowd, estimated by local press to be 100,000 people, congratulated Kenyans for holding peaceful elections.

Speaking briefly after his hosts had taken the oath of office, President Museveni who is also the current chairperson of the East African Community, urged Kenyans not to lose sight of the push for prosperity and development even as they spoke politics.

“On Uganda’s behalf I congratulate you upon holding a peaceful election and the victory,” said Mr Museveni, whose invitation to address the gathering by Mr Ruto was received by a long deafening cheer from the crowd. “I urge Kenyans to remember about four things; peace, prosperity and development. Do not focus only on politics.”

It was a message that was latched onto by President Kenyatta, who in his address faulted Africans for pursuing politics as an end, not a means to an end.

“As President Museveni has said, no one eats politics,” said Mr Kenyatta whose swearing-in came after his first victory in August was annulled by the country’s Supreme Court. He won a repeat election in October although it was boycotted by his main rival Raila Odinga.

“We have pursued politics as an end and not a means to an end. This must stop,” he said as the animated crowd kept interrupting his address with cheers and ululation.

President Kenyatta urged his countrymen to observe the rule of law, adding that the past electioneering months had tested the state’s institutions and found them firm.

“However serious our grievances are, the law must be our refugee and none of us should be outside the law. When the Supreme Court ruled to invalidate our election despite the win, we complied,” he said.

“This has demonstrated that we must live by the rule of law, we expect nothing less from you the citizens. Today we can tell the world that our constitution is not a mere paper,” added the President.

Mr Kenyatta commended the Judiciary and the electoral commission for exhibiting independence during the long drawn-out election period, also thanking Kenyans for showing resilience and maintaining peace during the election process.

He further informed the Kenyans that he was ready to work hard for the aspirations of those who had voted and not voted for him, adding that he would endeavor to bring prosperity and unity to all Kenyans.

He also gave a directive that any African visiting Kenya would just need just a passport and that a visa would be at the border or upon to entry into Kenya, saying that this is a sign of true Pan Africanism and unity.

President Uhuru promised to provide affordable housing to Kenyans and target 100% universal health care throughout the entire households of Kenya.

He concluded by calling upon Kenyans to pledge to reject politics based on religion and violence and embrace hard work, unity and brotherhood.

President Museveni and other head of states plus dignitaries were later hosted to an official inauguration luncheon at State House, Nairobi