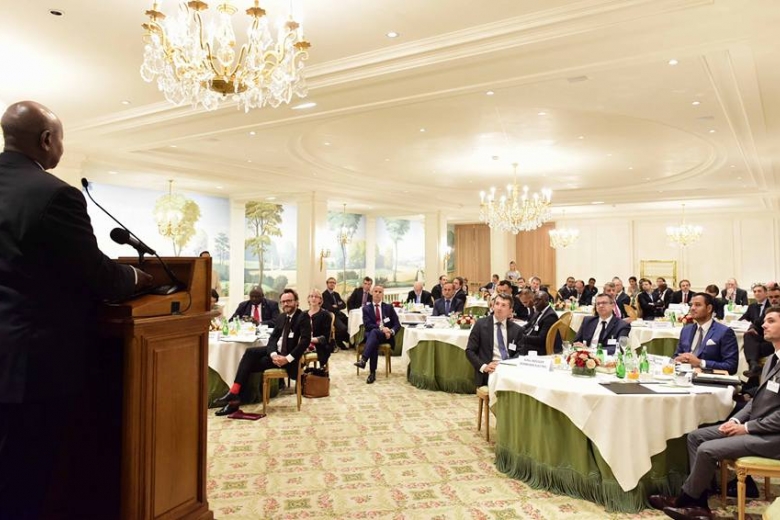 President Museveni is in the French Capital, Paris, for a two-day working visit meant to foster trade and investment relations between France and Uganda.

The President, accompanied by the First Lady, Hon. Janet Museveni, who is also the Minister of Education and Sports, was received last evening at Le Bourget Airport by the French Ambassador to Uganda, Ms. Sophie Makame. In her company, were 13 African Ambassadors accredited to France.

Also on hand to receive the President was Uganda’s Minister of State for International Affairs, Mr. Okello Oryem and Uganda’s Ambassador to France, Ms. Nimisha Madhvani.

During a brief address to the Ambassadors, President Museveni tasked them to market Africa as an investment destination for Europeans.

“Africa’s purchasing power is now at US$8 trillion with a population of 1.2 billion. Remind Europeans that Africa is a growing market and they should, therefore, take interest in it,” he told the diplomats.

He told them that East Africa, for example, was discussing a policy where investors would only sell their products if they are manufacturing in the region.

“For example, vehicles. If you don’t manufacture here, then you don’t sell here. Ethiopia is already doing it,” said President Museveni.

Today, Monday 18th September 2016, President Museveni will address the Movement of the Enterprises of France (MEDEF), the largest employer federation in France with a membership of over 880,000 firms.

The President, who is visiting France after over 15 years will, thereafter, hold bilateral talks with the French President Francois Hollande at his official residence, the Elysee Palace.

President Hollande early this year sent a congratulatory message to President Museveni upon his re-election. Uganda and France are partners in the global anti-terrorism fight.

On her part, the First Lady, who is also Minister for Education and Sports, will meet officials of Campus France, the public agency overseen by the French Ministries of Foreign Affairs and Higher Education, responsible for coordinating services for international students in France.

Ambassador Nimisha Madhvani said President Museveni’s visit will cement Uganda and France partnership economically and in the fight against terrorism.

“France has suffered with terrorism for the past four years. Uganda was once a victim of terrorist attacks but now is one of the safest countries. Therefore, France and Uganda must capitalize on this new partnership to help each other,” she said. ENDS