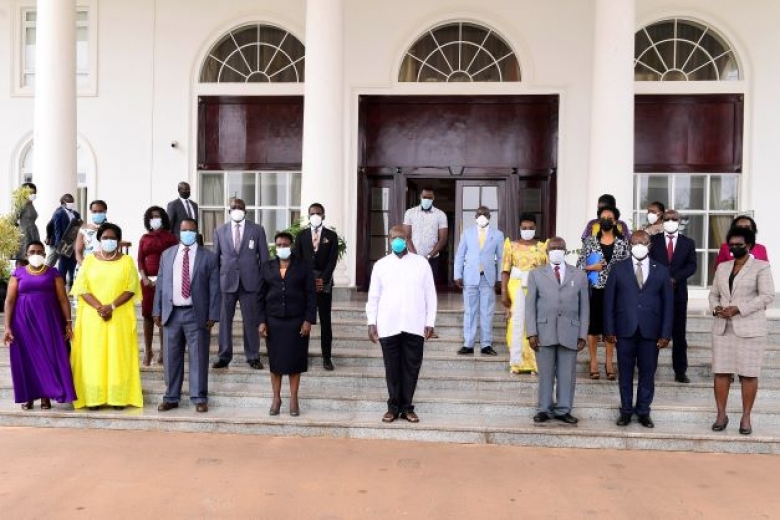 President Yoweri Museveni has cautioned the incoming Cabinet Ministers that this kisanjja is not for “talking” and emphasized that resolving the issue of getting the 39% of the population out of subsistence farming to a money economy in order to achieve the social economic transformation of the population in the country is key in this term of office.

The President was today presiding over the swearing-in of the last batch of Ministers including Hon. Wilson Muruli Mukasa Minister of Public Service, Hon. Sam Mangusho Cheptoris, Minister of Water and Environment and Hon. Kyakulaga Fred Bwino Minister of State for Agriculture Animal Industrial and Fisheries in charge of Agriculture. The oaths were administered by Ms. Deborah Katuramu the Deputy Head of Public Service and Deputy Secretary to Cabinet.

“This kisanjja is not for talking. I congratulate all the ministers for being elected. Two went through elections, Cheptoris and Kyakulaga while for Muruli Mukasa we agreed,” he said.

The President urged cohesion in the new cabinet in order to implement the programmes of NRM government enthusiastically adding that corruption must not be entertained.

He also called on them to lay emphasis on the integration of East Africa Community so that the issue of the market for Ugandan products can to be resolved.

This is the last group of Ministers to be sworn in before the President, the first one having been sworn in on Monday 21st June 2021 and 8th July, 2021 respectively. President Museveni was gifted an artist impression of himself by the son of Hon. Muruli Mukasa.