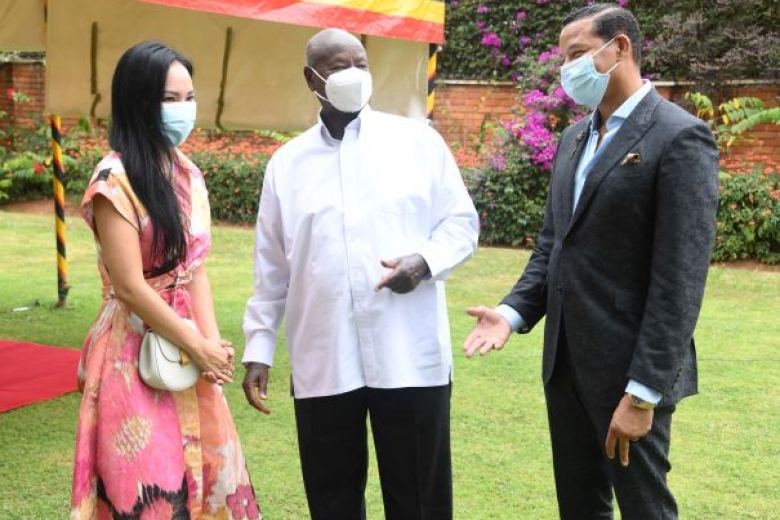 President Yoweri Kaguta has said he welcomes the idea of the New Hydrogen Technology Initiative by visiting American Actor Terrence Dashon Howard and his wife Mira Pak who are in Uganda to explore Uganda’s tourism potential and investment opportunities in technology.

“You are most welcome to Uganda. We are ready on our side to work with you,” President Museveni said.

The couple, paid a courtesy call on President Museveni at State Lodge Nakasero where they held a jovial discussion with the President.

The couple will visit different parts of the country to explore the beauty of the countryside and explore Uganda’s magnificent tourism potential among others.

Mr. Terrence is also looking for investment opportunities in the fields of technology. He says that he wants to start up a New Hydrogen technology plant in Uganda, which will be the first of its kind in Africa.

Hydrogen is a chemical widely used in various applications including ammonia production, oil refining and energy

Mr. Terrence Howard who is a professional in Science and Technology revealed that he has been practicing his profession especially in the field of research at the same time doing his film acting.

“Thank you for allowing us to meet you. I want to develop a New Hydrogen technology in Uganda. The main purpose of the project would be to defend the sovereignty of the country as far as technology is concerned,” Mr. Terrence said.

He commended President Museveni and the government for their wise and exemplary leadership, which has helped the country to make positive strides.

Terrence Howard’s first major role in the 1995 films Dead Presidents and Mr. Holland’s Opus helped him break into the mainstream with a succession of television and Cinema roles between 2004 and 2006. He was nominated for the Academy Award for Best Actor for his role in Hustle & Flow.

The actor has had prominent roles in many other movies, including; Winnie Mandela, Ray, Lackawanna Blues, Crash, Four Brothers, Big Momma's House, Get Rich or Die Tryin', Idlewild, Biker Boyz, August Rush, The Brave One, and Prisoners.

He also played James "Rhodey" Rhodes in the first Iron Man film. He starred as the lead character Lucious Lyon in the television series Empire.

The meeting was attended by Hon. Frank Tumwebaze, Minister of Agriculture, Animal Industry and Fisheries, Hon. Joyce Ssebugwawo, Minister of State for Information, Communications and Technology, Abbey Walusimbi, Presidential Advisor on Diaspora Affairs among others.