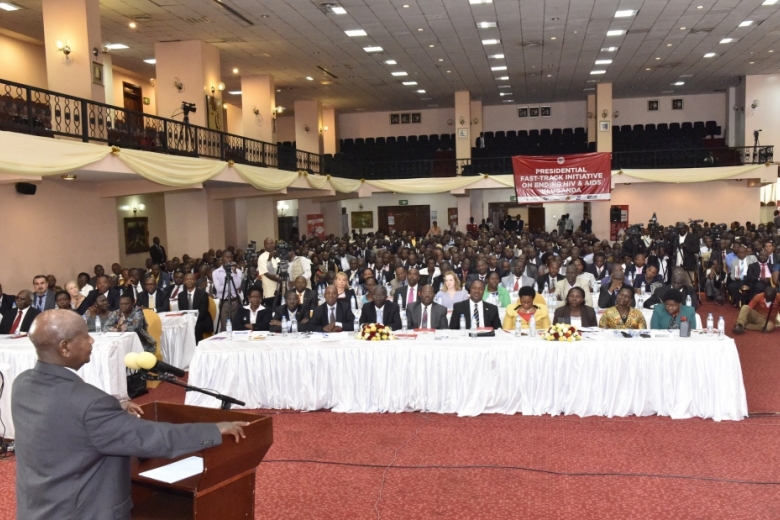 President Yoweri Museveni has appended his signature to the Presidential commitment and campaign programme against further transmission of the HIV/AIDS epidemic.

This was during the launching of the Presidential First-Track Initiative to End the HIV/AIDS Pandemic  as  public  health  threat  in Uganda by 2030. The launching took place at Imperial Royale Hotel in Kampala under the theme ‘Ending AIDS by 2030’ that attracted representatives from several international organizations like UNAIDS, UNDP, WFP, Uganda’s development partners, top government officials, religious and district leaders, among other dignitaries. Among the targets to endAIDS in Uganda by 2030 includes engaging men in HV prevention, close the gap on new infection particularly among the adolescent girls and young women.

“AIDS has been a simple disease. Its transmission has been through a few ways. It’s not infectious. And now that more controls have been added on, let us target an HIV/AIDS free Uganda by 2030,” said President Museveni.

He stressed that to be healthy is very important because it enables one accomplish a task without interruption. He said that the launched campaign is for those who have kept a deaf-ear to the sensitization and especially the organizations, leaders and medical practitioners who have not played their role to talk to the masses.

“Sensitization is very effective. Before the ARVs were introduced, open campaign against AIDS sensitization was only by talking and alerting people. That recorded a reduction in infection from 30% to 6%. Use your tongue as a special weapon to fight the scourge,” he said. He, therefore, challenged the Uganda AIDS Commission (UAC), the Ministry of Health officials and local leaders to fully exploit the advantage that Ugandans are good at listening and grasping any vital information adding that by not reaching out to them, is a disservice.

On learning that the statistics of 2016had indicated that the infection rate of AIDS among men was higher than women by 40%, President Museveni strongly called on men to undertake voluntary screening to know their serostatus.

“All men who are not aware of their HIV serostatus, should go for voluntary testing. Those who find themselves positive, should go on drugs. Once the virus is suppressed, then life is prolonged. You should stop infecting other people. It is criminal. This is not something to be discussed but it must be done,” he emphasized.

The President also expressed displeasure to learn that with the readily available controls against AIDS ,the infection cases of mother-to-child are at 3000. He observed that mother-to-child infection should come to zero.

The visiting Zambian First Lady, Esther Lungu, who delivered the speech of the Chairperson of the Africa Union First Ladies Association (AUFLA) Gertrude Maseko Mutharika, the First Lady of Malawi, noted that  Uganda has been leading in the campaign in the fight HIV/AIDS on the continent of Africa. She said that as First Ladies, their consultation on the matter of AIDS pandemic includes action.  She added that the First Ladies face a challenge of ensuring that orphanage children access necessary treatment with dignity.

On behalf of her Ugandan counterpart, Ms. Esther Lungu delivered the speech Hon Janet Museveni who urged Ugandans to join President Museveni to accomplish the vision of witnessing a free HIV/AIDS Uganda by 2030.

“By 1980s,  it was difficult to fight  the scourge. Let’s join together to fight AIDS and we shall overcome it,” said Janet Museveni.

The Executive director of UNAIDS, Michel Sidibe discouraged stigmatization of the new AIDS infections saying they should instead be protected. He also stressed the need to stop mother to child AIDS infection and to end the pandemic in Africa adding that in Uganda it was time to invest in human beings under “Kisanja Hakuna Mchezo.”

Presidency Minister, Esther Mbayo, said that President Museveni’s cause and fight against the AIDS is well documented by guidance, oversight, campaign and sensitization. She said that among other strategic means to handle the task is to reach out to all communities through the available media.

Health Minister, Jane Aceng, on her part said that the impact assessment records indicate that an estimated 1.4 million people are living with HIV. She added that out those, one million are enrolled in care units while others were on antiretroviral treatment by March this year. She also disclosed that the majority of the infections are in Central Region. ENDS