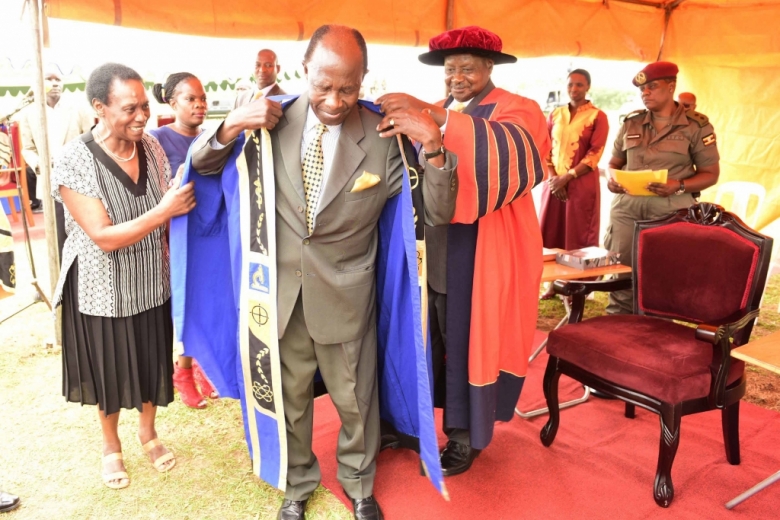 President Yoweri Museveni has said government does not support the establishment of courses in higher institutions of leaning in the country that are not marketable.

“Let us not start any course that has got no relevance to the job market. The Government will not fail to support you with funds for personnel and essential requirements for promoting science education. He was pleased to note that MUST was small and working under a quality base,” he said.

The President made the remarks during the installation of the 4th Chancellor and the 28th graduation ceremony of Mbarara University of Science and Technology (MUST) at which 1,028 science and technology graduated with degrees. Mr. Museveni attended the ceremony as visitor of public universities in Uganda.

The ceremony took place yesterday at the institution’s Kihumuro Campus in Mbarara Municipality. The new Chancellor is Prof. Charles Mark Lwanga Olweny who has replaced Prof. Peter Mugyenyi who served 2 terms of 4 years each.

President Museveni, who reiterated that all the universities in the country, must ensure that the minimum entry requirements are maintained expressed happiness that Mbarara University of Science and Technology has graduated over 1,300 medical doctors since its inception in 1989.

He observed that by the time MUST started, Uganda was suffering from a challenge of having only 80 medical doctors graduating per year from Makerere University, the only University in the country then.

“Africans suffered from ideological anesthesia at a small rate of 80 medical doctor graduates per annum in Uganda,” he noted.

He said that the situation that obtained at that time fell far short of the World Health Organization’s policy of the recommended ratio of one medical doctor per 500 people; adding that Uganda, which has got a population of 40 million, needs a team of 80,000 medical doctors.

He congratulated Prof. Olweny upon his appointment as new Chancellor of Mbarara University of Science and Technology. Noting that Professor Olweny has got a long and distinguished career, the President expressed optimism that the institution would greatly benefit from his wide knowledge.

Mr. Museveni paid tribute to the outgoing Chancellor Prof. Peter Mugyenyi for not only his long and good service to the institution but also for taking care of AIDS patients at the Joint Clinic and Research Centre (JCRC). He encouraged him to continue serving the JCRC facility.

The President commended Prof. Frederick Kayanja for the good job as pioneer head of the Mbarara-based university facility and lauded late Cuban leader, Fidel Castro for the assistance to MUST.

“I thank President Fidel Castro of Cuba who helped me to start teaching and treating people at MUST,” he said.

President Museveni called on the people of Mbarara district in particular and Uganda at large to protect the environment by planting trees and restoration of swamps.

The First Lady and Minister of Education and Sports, Hon. Janet Museveni said the ceremony was a testimony to President Museveni’s commitment to higher education adding that Uganda has made big strides having expanded from one university in the 1980s to the current 9 public universities. She was happy to note that the country has 41 private-run universities. She reported that both private and public universities in the country have a total enrolment of 160,000 students.

She thanked Mbarara University of Science and Technology for training high caliber personnel who meet the demand of the job market. She urged MUST graduands and the University community at large to guard against the HIV/AIDS scourge.

The New Chancellor Prof. Charles Lwanga Olweny saluted President Museveni for accepting the recommendation of the University Council and for appointing him. He thanked the Government, donors and all stakeholders for their contributions to the promotion of MUST. He presented awards to outstanding graduands who were led by Mr. Silas Nankwatsa and Mr. Paul Baguma.