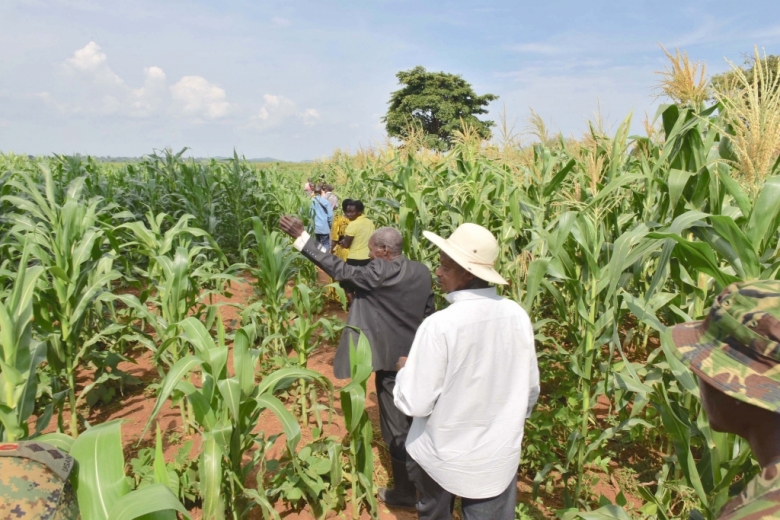 President Yoweri Museveni, now camped in Mayuge district on a three day mobilization tour to promote governments’ operation wealth creation has urged the people of Busoga to focus on fighting poverty from their households while government consolidates development programmes such as roads, electricity and other public infrastructure for greater good.

“I have come to live near you here so that we fight poverty together. You cannot say that because there is no tarmac road, you can’t rear animals or grow cost effective crops to earn incomes. When you have pigs or chicken, will they refuse getting on a vehicle for the market because the road is murram,” the President who also commissioned the new Kityerera State Lodge and Presidential Demonstration Farm to sensitize and train the communities on creating income generation activities had initially visited some of his neighbours in Kityerera to interact with them about governments’ operation wealth creation activities. The President’s farm has pineapples, passion fruits, bananas, a vegetable garden, mushroom project and a zero grazing project. To effectively demonstrate the fight against drought, Museveni protected an underground pond that he uses for drip irrigation using plastic bottles.

He participated in spraying the dreaded fall army-worm that is destroying farmers maize crops on a ten acre maize garden of Otibini Valantine of Bubalule village. The President used a pesticide stricker to spray. According to NARO, other pesticides include rocket and Engeo. Pesticides are better sprayed early morning and evening.

Later, the President toured the home of the late Nkoko William that runs OWC enterprises of Zero grazing, poultry, coffee and oranges. The President pledged to provide a chin link fence to guard against encroachment and theft.

In Bubugi village on the shores of Lake Victoria, the President visited the farm of Soma Tomas who practices mixed farming and has pineapples, pawpaws, cocoa, coffee, maize and banana enterprises on a six acre peace of land. The President donated to him a water pump for irrigation.

Later, the President addressed a massive public mobilization rally at Bugadde Primary School, Kityerera where he called on the community to embrace governments operation wealth creation through cost effective enterprises. He said while government had diverted funds meant for infrastructure development to procure food relief, this is not sustainable as it stagnates programmed government plans for implementation.