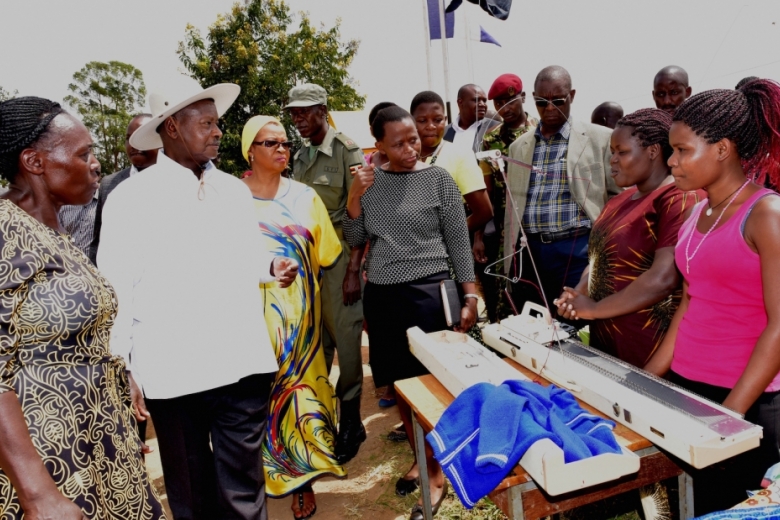 President Museveni has  expressed gratitude over the progress made at Lutunku Community Polytechnic.

This followed testimonies given by old boys and girls of the institution. The visibly excited former students testified how the skills acquired from the institution have helped them generate income leading to the transformation of their lives.

"I am happy to see that Lutunku Community Polytechnic has been fruitful. I will upgrade the school to a technical institution, but it should not stop the primary school enrolment so that the P.7 school drop outs are not left out," he said.

The President was  speaking to the staff, students, leaders and wananchi at Lutunku Community Polytechnic in Lugusuulu Sub-County, Mawogola County in Sembabule district, where he was checking on the institution’s progress since its inception in 2005.

He pledged government support to students with equipment and facilities for group work. He also pledged two vehicles to the school to ease their transport challenges.

President Museveni urged the people of Lutunku to work hard to fight poverty in their district adding that this is the reason why God gave brains and hands to human beings because, he added, He wants us to work hard.

"The quarantine on the slaughter, sale and movement of cattle internationally had been stopped but some selfish politician from Isingiro district illegally opened it thus the disease outbreak. Stop mixing politics with the country’s economy. Uganda has been exporting milk to Kenya, Rwanda and Sudan but because of the foot and mouth disease outbreak, the market will be closed until the disease is over,” he said.

Mr. Museveni used the occasion to advise pastoralists to take good care of their livestock to avoid the infectious diseases adding that foot and mouth disease is a fatal and affects only cloven-hoofed animals including cattle, sheep, goats and various wildlife game. The virus spreads through cow dung, milk, meat and air. The virus causes high fever for two to three days followed by blisters inside the mouth and in the hooves that may rupture and cause lameness and death.

President Museveni explained that measures, such as vaccination, have been put in place to avoid the spread of the disease but it doesn't cure. He said these measures don’t stop cattle from being infected, however, the best way is to make sure that animals are carefully taken care of.

State Minister for Water, Hon. Ronald Kibuule, said that the problem of water system in the villages of Sembabule district as well as that of Lutunku Community Polytechnic will, with immediate effect, be addressed.

The Commissioner in the Ministry of Education and Sports, Ms. Musene Safina, disclosed that the Ministry will upgraded the school to a technical institution and that more professional teachers will be posted to the school.