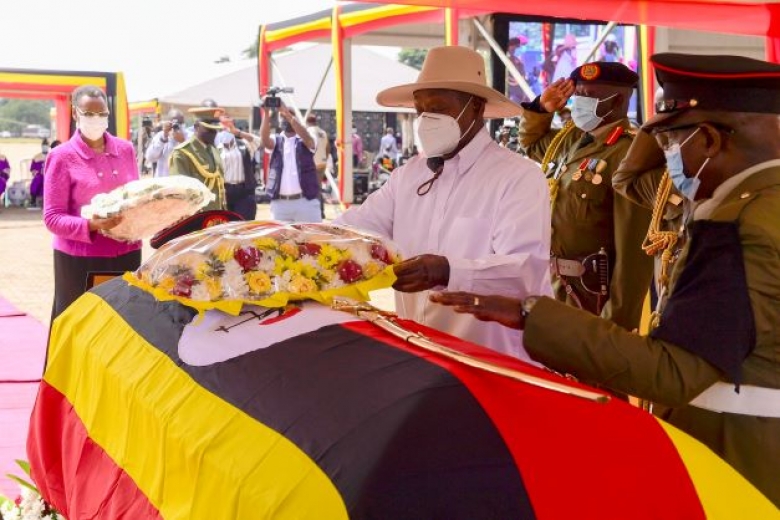 President Yoweri Kaguta Museveni who is also the Commander-In Chief (C-I-C) of the Uganda People's Defense Forces (UPDF) has  hailed the fallen Gen. Elly Tumwine as a patriotic and resilient  man who continued with the struggle of liberating Uganda even  after sustaining facial injuries during the war that led to losing an  eye.

Gen. Elly Tumwine Tuhirirwe, one of the 42 people armed with 27  guns who attacked Kabamba barracks on February 6, 1981 to  launch the protracted war of the National Resistance Army (NRA)  that five years later in 1986 would usher the current government  to power, succumbed to cancer-related complications in Aga Khan  Hospital in Nairobi, Kenya, at the age of 68.

“Tumwine was a resilient man. Because he was injured badly at  Bukomero but healed and came back and continued with the  liberation struggle,” H.E Gen. Museveni said, adding that young  people should emulate him.

“So, that spirit of Patriotism and sacrifice, you the young people  you should learn from it”.

The President was speaking at a funeral service organised at Kololo  Independence Grounds to celebrate the life of a man who is credited for having fired the first bullet that launched the five-year  NRA liberation struggle.

Gen. Museveni who recounted the times he taught Tumwine and  others in 1967, gave a  detailed account of how the fallen soldier shot the first bullet at  Kabamba to capture 650 guns.

H.E the President said Tumwine was always active and involved in other attacks in Masindi that led to the capture of 760 guns and  another attack in Hoima.

“This was God who did this actually. God used Tumwine to fire the  first bullet,” Museveni said, describing Tumwine as having  achieved a lot despite dying at 68.

“So, I am here to give this little testimony on Gen. Tumwine, dying  at 68. He was still young but had achieved a lot and I am very  happy to hear that he died a satisfied man,” H.E Museveni added.

The President also hailed Gen. Tumwine for having joined the  socio-economic transformation of his rural area in Kazo district  and had no kind words for those insulting the deceased.

“People insulting Tumwine are wasting their time because he's  somebody who has accomplished so much,” Gen. Museveni said.

He said Gen. Tumwine has not died because he has left behind a  family and has done so much on earth that people will live to  remember.

“Tumwine has not died. He is abundant here. Giving birth  (oluzaaro) is part of eternity. So, what we do on earth really  matters,” Gen Museveni said.

On her part, the First Lady and Minister of Education and Sports,  Mrs. Janet Museveni, eulogised Gen. Tumwine as someone who  lived a fruitful life and achieved his mission.

“We know that we will miss Tumwine, all of us seated here but we  believe that he is gone to a better place and we are grateful that he  has achieved his mission,” Mrs. Museveni said.

The family of the deceased General described their family head as  a unique and very rare human being who loved God, his country  Uganda, the army but above, all his family.

The widow, Jolly Tumwine, said her husband had a big, generous heart and looked after and supported so many children who have  since graduated in various professions, describing the action as a  blessing and a great legacy which will never be erased.

“In the 35 years God gave us, I saw him grow in his walk with  Christ. He was very bold in testifying about what God had done in  his life and committed to preaching God’s words,” Jolly said.

The family thanked President Museveni for the support he has  rendered to them over the years up to now when they are seeing  off their dear father.

On behalf of the UPDF, the Chief of Defense Forces (CDF), Gen.  Wilson Mbasu Mbadi, said they have lost an accomplished leader  and mentor who has been a long-time member of the UPDF High  Command.

Gen. Mbadi said Gen. Tumwine has been a dedicated and  hardworking cadre who grasped the NRM/NRA ideology, passed it  on to others and practiced it and was very instrumental to the  restoration of peace and stability in Uganda.

“UPDF is, therefore, saddened by the loss of such a senior  professional cadre, whose input has contributed to the  environment that we are enjoying now,” Gen. Mbadi said.

The funeral service at Kololo was led by Bishop Emeritus Edward  Muhima of North Kigezi Diocese who preached passionately about  the meaning of life and death from the first book of Thessalonians.  He described Gen. Tumwine as a Christian soldier, tough but also  generous.

“General Elly Tumwine was a tough-minded soldier but tender hearted born again Christian who would challenge evil but at the  same time had love and a heart for those who would disagree with  him and would accommodate them in his heart,” Bishop Muhima  said, adding that the fallen General was a serious man and yet very  modest in his life.

Mr. Enos Tumusiime, on behalf of friends, described Gen.  Tumwine as one who lived a full life and died a satisfied man who  believed that he had fulfilled his mission on earth.

“He loved the army. Your Excellency, you had a disciple for the  army in the name of Tumwine,” Mr. Tumusiime said.

After the service, Gen. Tumwine's body was airlifted to  Rwemikoma in Kazo district where he will be buried tomorrow,  Tuesday, August 30, 2022.