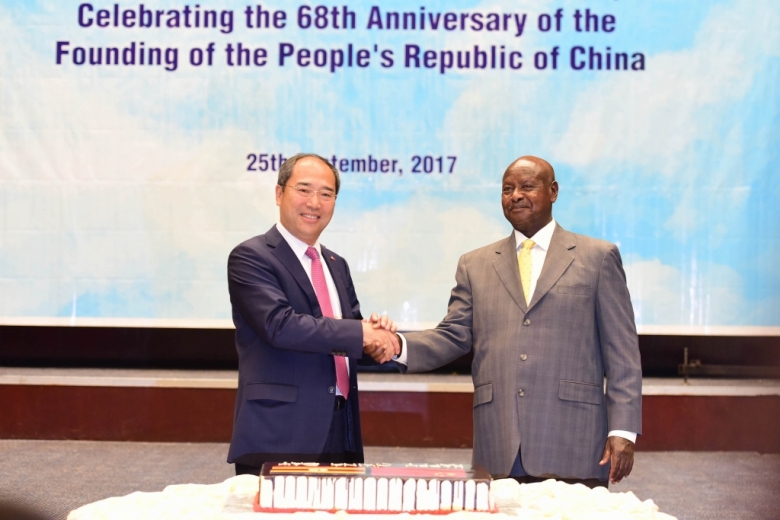 President Yoweri Museveni has hailed the People's Republic of China for the great contribution towards Africa's realization and attainment of independence even when China was still under developed.

"Our gaining of freedom was because of three things; resistance of our leaders; imperialists started fighting each other and the support freedom fighters got from socialist countries. That's why I am here to salute the People's Republic of China for the emancipation of Africa," he said.

Mr. Museveni noted that China continues to enjoy cordial relationship with Africa because the Chinese understand and give support where it is needed.

President Museveni was last night speaking at a dinner held at Kampala Serena Hotel to commemorate the 68th anniversary of the founding of the People's Republic of China. The National Day of the People’s Republic is marked annually on 1st October as a holiday.

"There other week we were in America and we discussed with President Trump and informed him that the Chinese help where we need help; that is infrastructure. Others want to give support where we don't need it e.g. homosexuality, etc. The Chinese are always focused on our priorities, which include infrastructure, technology transfer and tourism, among others,” he said.

He saluted and proposed a toast to the continued relationship between the People’s Republic of China and Uganda over the years.

The Chinese Ambassador to Uganda, Mr. Zheng Zhuqiang noted that President Museveni’s presence at the dinner symbolized the great importance the Ugandan leader attaches to the Sino - Uganda relationship. He further reiterated China’s commitment to the continued partnership with Uganda so that Uganda’s 2040 Vision is realized.