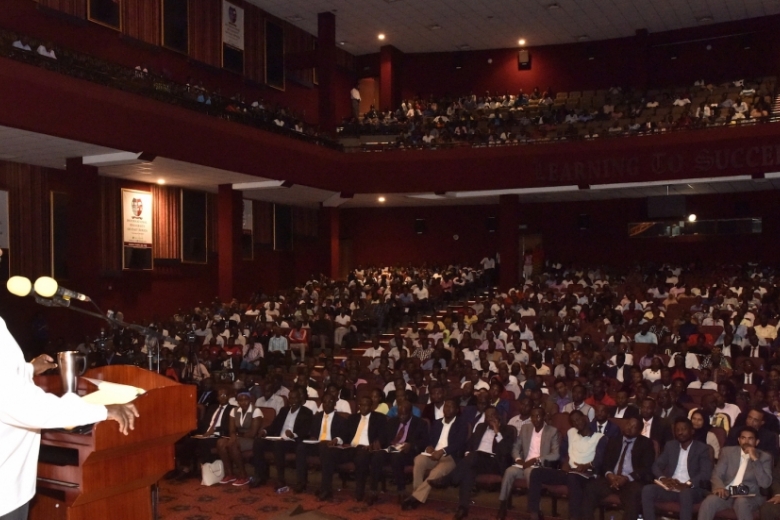 President Yoweri Museveni has emphasized the need for African countries to integrate saying integration is for scientific and objective reasons.

This was during an address to students at 5th Annual Convention of the Great Lakes Young Leaders’ Forum, which ran under the theme ‘Defining the Role of Young People in Fostering Stability, Integration, Economic Transformation in the Great Lakes Region.’ The function took place  at the International University of East Africa (IUEA) in Kansanga in Makindye Division.

The forum initially began in September 2007 as a young leaders’ association and after it had expanded it was launched in July 2013 by President Museveni.

The President informed the students that if they desire to see their families prosper, integration is a very crucial instrument that they should embrace because the attainment of wealth helps in the expansion of the market for African products. He cited as an example how Uganda is able to market 3 million tonnes of maize to other African countries while the country consumes only 1 million tonnes. He added that if there was no East African market, Uganda’s maize industry would not have been sustainable.

Mr. Museveni also impressed upon the students the fact that integration also puts Africa in position as as a bloc to negotiate with larger markets of the world. He added that this makes it easier for the continent to formulate marketing policies.

“If Uganda goes alone to negotiate with China, it is like a rabbit negotiating with an elephant. Negotiation needs to happen among equals,” he remarked.

The President stressed to the students that integration is very essential because it helps in the attainment of strategic security for Africa.

“The insurance policy for the future of Africans is in their strength,” he said.

He strongly cautioned Ugandans who love indulging in promiscuous activities, like strip tease (Ekimansulo) and said that they should instead participate in developmental programmes like security spaceship programmes. He further urged students to adhere to integration and Pan-Africanism noting that it helps them to identify themselves as Africans who are similar and linked.

“You must be a Pan Africanist. If you are not, you are an enemy of your tribe,” he said.

The President has attended the forum for the past four years. The excited students were very grateful for the opportunity they got to be taught by him. ENDS