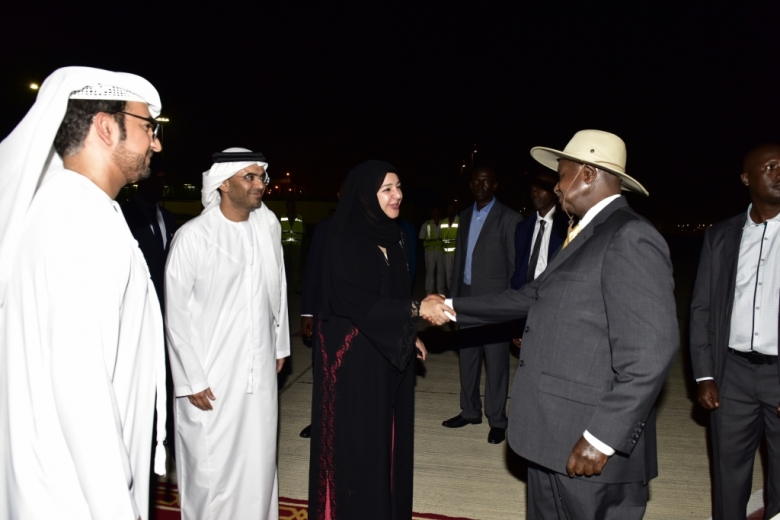 President Yoweri Museveni is in the United Arab Emirates Commercial Capital Dubai, for a three day working visit during which he will attend the 4th annual global Business Forum on Africa (AGBF).

The President who is in Dubai at the invitation of the Ruler of Dubai who is also the Vice President and Prime Minister of the United Arab Emirates, His Highness Sheik Mohammed Bin Rashid Al Maktoum, was received at the Royal VVVIP terminal of AL Amari Airbase, which is exclusively for guests of His Highness by Her Excellency Rheem Al Hashmy Minister of State for International Cooperation and Development, the Chairman of Dubai Chamber of Commerce and Industry H.E Majid Saif All Ghurair, Uganda’s Minister of Energy and Mineral Development Eng. Irene Muloni, Minister for Security Henry Tumukunde, The Minister for Tourism Prof. Ephraim Kamuntu, the Senior Presidential Advisor on Defence and Security Gen. Proscovia Nalweyiso, Uganda's Ambassador to UAE Nimisha Madhivani, Uganda's Honorary counsel to Bangladesh, Mr. Hussain Abol ,  Uganda Embassy officials among others

The President is expected to speak at the Heads of State Dialogue, under the theme “Next Generation Africa – Realising the Promise of Integration.”

President Museveni who has shaped Africa’s course for decades, first as independence fighter and, since 1986, as president of Uganda is expected to share lessons of his years of experience and highlights what he sees as the priorities for the upcoming generation of African leaders – pan-African trade, investment and tourism.  His session will be moderated by Sangu Delle, Chief Executive Officer, Golden Palm Investments, Ghana.

The forum, now taking place at the Madinat Jumeirah in Dubai is being held under the general theme, “Next Generation Africa”.

Speakers include other Heads of State, high-ranking officials, Fortune 500 CEOs, alongside other prominent leaders in business and investment from Africa, the Gulf and across the world.

AGBF Africa provides a unique opportunity to listen to global thought leaders engage in inspirational, thought-provoking, and future-focused dialogues that shape the future of governments and business.

The Chairman Dubai Chamber of Commerce Majid Saif All Ghurair expressed his gratitude for President Museveni’s presence saying his attendance will be of great value for the conference as far as knowledge sharing is concerned.

He said that the forum will be focusing on the next phase of growth and development with Africa’s most innovative businesses. “It will explore the potential for leveraging technology to accelerate growth across Africa, discuss the power of the emerging private sector and identify the opportunities for financing and partnering with Africa’s dynamic entrepreneurs. It is also aimed at enhancing relations between Dubai and Africa, assess economic environment as well as share experiences using Dubai as a base,” he said.