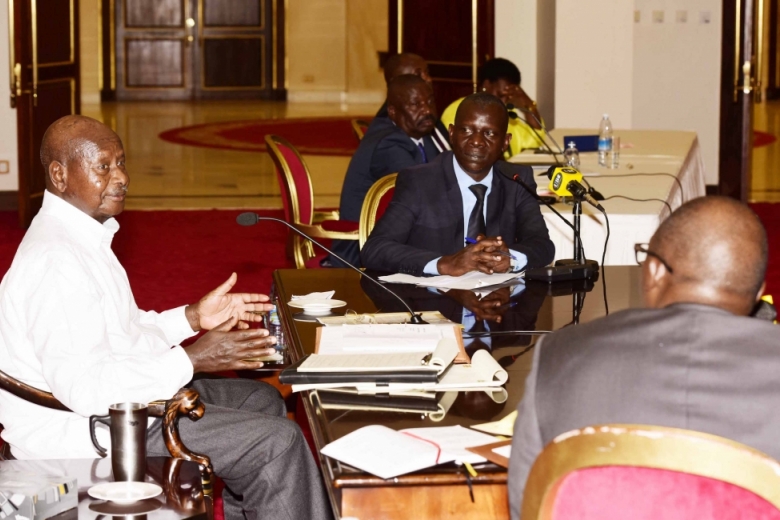 “Those people who were saying that the government wants to steal people's land, I am now here to demystify that lie," he said.

The President was  addressing Ugandans on pertinent issues regarding the proposed Land Amendment Bill. The 3-hour live media phone-in talk show at State House, Entebbe saw the President reiterate in no uncertain terms that the continued development paralysis is totally unacceptable.

The truth is if we want to see Uganda develop, we have to wrest this idea from the corrupt and those who want to loot the country so that we embrace development," he explained.

Mr. Museveni criticized the ignorant saboteurs who seem to know nothing on private sector matters adding that those countries that some Ugandans worship and praise are developed because of the business sector.

"The modern world is about private sector. When you hear that countries like USA, Japan and others are strong this is because of private companies and you are here worshipping them. This ignorance must stop," he counseled.

The President reminded the people of Uganda that it is the work of modern governments to promote the private sector adding that it is high time Ugandans woke up on this issue if they are to realize development.

"Of recent, a Member of Parliament faulted me for defending the private sector asking me if I had shares in the Madhvani Group of Companies. According to him one can only defend the private company if you have shares there, and this a leader," the President wondered.

President Museveni further noted that the proposed Land Amendment Bill should be designed to cover specific areas such as tarmac roads, electricity lines, airports and railway lines as opposed to the current generalized set up for all sectors big and small in order to avoid future misuse by some individuals.

Turning to the general welfare of the people of Uganda, President Museveni highlighted issues hinged on Prosperity for All. He strongly advised Ugandans to engage in commercial production to fight household poverty and maintain peace in the country.