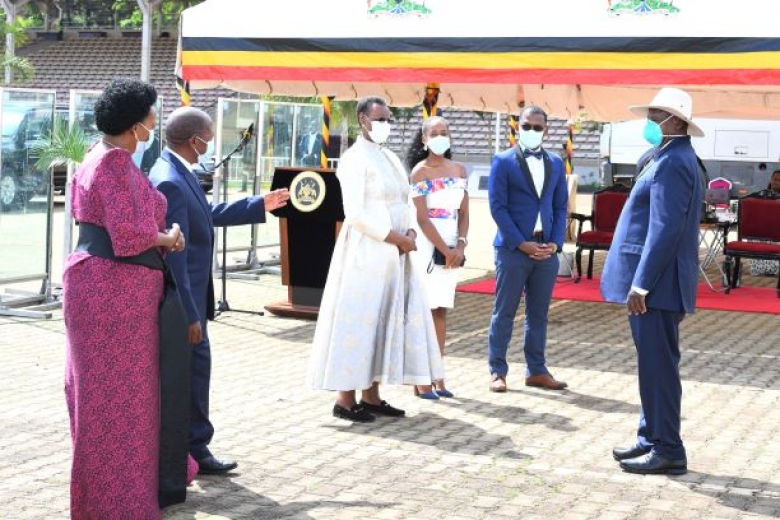 President Yoweri Museveni has defended his choice of the new cabinet describing the new Ministers as very hard working loyal and patriotic cadres who are incorruptible. He urged them to decisively push Uganda into a middle income nation in this 5 year term.

“The Vice President Hon. Jesca Alupo is a hard worker and listens to my advice She caused change in Teso through enterprise selection especially the growing of fruits and she also works for unity of the people. The Prime Minister the Rt. Hon. Nabbanja is a very committed, hard working and active mobiliser. She is anti-corruption and straight forward. Some of the cadres I notice and I identify them,” he said.

The President made these remarks after the swearing in of the new cabinet who included among others the First Lady Mrs. Janet Kataha Museveni who has remained in her docket as Minister of Education and Sports.

The function took place at Kololo ceremonial grounds in Kampala.

President Museveni said that this time round he decided to bring on board the children of the veterans as well as the youth whom he asked to push the programs of their parents in the development of their country.

President Museveni who congratulated members of the new cabinet for being sworn-in and the people of Uganda for the successful elections despite some challenges, pointed out the main strategic mission of the new cabinet is to resolve the issue of getting the 39% of the population from subsistence farming to the money economy in order to achieve social economic transformation of the population in the country.

He added that there must be cohesion in the new cabinet so as to implement the programmes of NRM enthusiastically adding that corruption must not be entertained.

“We now have a parliament and a cabinet. We are set now. The first meeting is on Monday despite the lock-down so that the country is running. I strongly appeal to you the new ministers, don’t seek or accept favors. I want this to be a cabinet of no corruption,” he stressed.

He vowed to smash the vice saying the fight has already started with the Uganda Airlines. He called on the new cabinet to embrace patriotism and be a government of service delivery especially in the sectors of education, health, infrastructure and the issue of justice citing the land evictions that have generated a lot of outcry from the population.

President Museveni further urged the new cabinet to lay emphasis on the integration of East Africa pointing out that the issue of the market for the Ugandan products has to be resolved.

“We must resolve the issue of the market. The economy is growing where do we sell our products that is why I put my sister Rebecca Kadaga there assisted by my old comrade Magode Ikuya,” he said.

The President said NRM had registered a lot of achievements in spite of very many challenges that included among others the COVID-19 pandemic and the opposition political actors. He observed that the economy had grown 31 times bigger than it was in 1986 adding, that according to the moderate growth, Uganda’s economy was projected to be US$ 70 billion by 2026.

He cited products whose earnings have leapt like coffee, maize, milk, tea, sugar, cattle and tourism that before the COVID- 19 out break were fetching US$ 9.6 billion.

Mr. Museveni said other sectors that have witnessed great achievements include education, health, infrastructure like roads electricity, telephones, piped water among others.

He said that the biggest good news was the disclosure in the recent budget of the decline of the population that was not in the money economy from 68% to now 39 %.

“This cabinet must now resolve the issue of farming for the pocket and for the stomach,” he said.

He however, attributed the slow pace of achievements, to the opposition by civil servants and also political actors whom he likened to parasites.