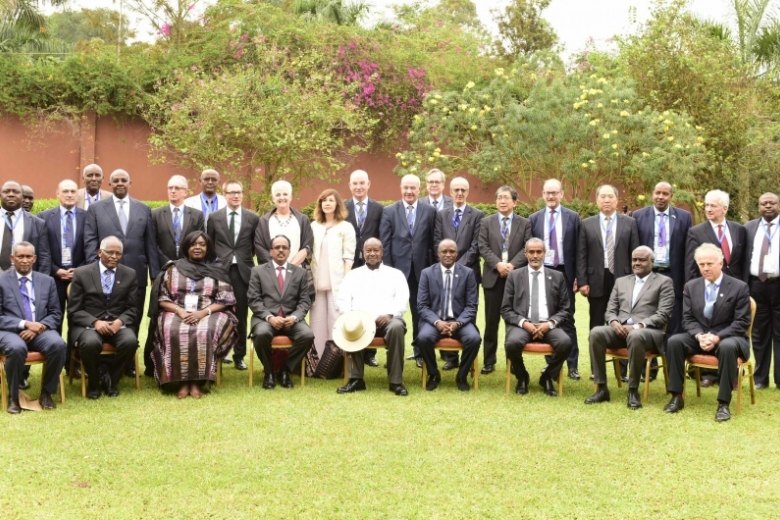 President Yoweri Museveni has called upon the United Nations Security Council not to repeat previous mistakes made in Somalia.

The President made the remarks today at the Summit of Heads of State and Government of Troop Contributing Countries (TCCs) to the African Union Mission in Somalia (AMISOM) held at Speke resort Munyonyo Hotel in Kampala.

“If we do things right, chances are Somalia will be much better anytime soon. Let us avoid new mistakes,” he said.

President Museveni convened the Summit in the wake of the challenges AMISOM was facing, characterized by a mismatch between the mission ideals and resources.

It also followed the adoption of the UN Security Council resolution 2372 of 30th August 2017 whose main thrust was the phased reduction and drawdown of AMISOM troops by 2020.

President Museveni mandated the African Union Commissioner, Mr. Moussa Faki Mahamat to communicate to the UN Security Council the decisions and recommendations of the Kampala Summit.

According to the Troop Contributing Countries (TCCs), the timeframes and troops levels under the UN Security Council Resolution 2372 are not realistic and undermine the capacity of AMISOM to deliver its mandate and would lead to a reversal of the gains made by AMISOM.

The Somalia National Army (SNA) and AMISOM have recovered more than 80% of Somalia but despite the notable achievement, the situation remains fragile with Al Shabab and other terrorist groups in the Horn of Africa country remaining a threat to Somalia, the region and to international peace and security.

The TCCs, therefore, urged the UN Security Council to reconsider resolution 2372 on draw down of the mission, restore AMISOM to previous troop levels and stay any further reduction of AMISOM troops in order to allow recovery of territory still under control of Al Shabab and other terrorist groups. The TCCs also called for ample time for integration, reorganization, training and mentoring of the Somali National Security Forces (SNSF).

The TCCs also requested the partners to support the enhancement of the capacity and training of the Somali National Security Forces (SNSF) to maintain peace and security in Somalia and the integration exercise of the Federal Member States’ Forces into the Somali National Army (SNA) and to enhance their support to the Federal Government of Somalia so as to stabilize the political situation in the country and also the strengthening of administration structures and systems in areas liberated from Al Shabab.

The AU’s Commissioner, Mr. Faki Mahamat said that the continued presence of AMISOM in Somalia is crucial and a welcome commitment as well as an offer from partners to support AMISOM and the Federal Government of Somalia in their stabilization efforts.

President Mohamed Abdullahi Mohamed of the Federal Republic of Somalia thanked President Museveni for taking the decision to deploy troops to Somalia ten years ago and his commitment to achieve peace in Somalia.

“I believe AMISOM is succeeding but we have a long way to go. We need to collaborate and continue funding to defeat Al Shabab,” he said.