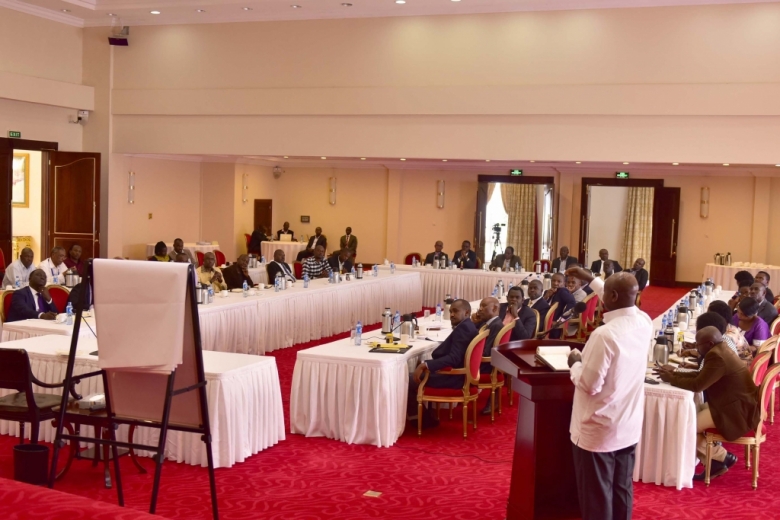 Addressed the Presidential Media Roundtable at State House Entebbe. This is my initiative where I meet media owners and managers, sharing my thoughts on topical issues while receiving feedback from them.

Our discussion focused on the survival of Africa and the African people and the media's role in ensuring this survival.

Africa has a long story. Fortunately, we have put in writing our diagnosis of Africa. The media at times does not bother to understand or follow but we continue to work with our people despite attempts at disorientation.

Whereas African leaders pre-1498 could be forgiven, those who ruled after this landmark year when Vasco da Gama came to the African coast cannot be forgiven.

For 364 years, they stayed in the dark. When John Hanning Speke reached Uganda in 1862, African leaders had failed to detect the danger of colonialism. They were consumed by intra-tribal wars, egocentrism and were instead supporting slavery.

Our leaders failed to use the nearly 400 years to prepare themselves. And yet Africa's defences like Malaria and difficult terrain could not stand anymore because Europeans had discovered quinine and Stephenson had discovered the steam engine.

When Christopher Columbus discovered America, Africans became a target for labour hence slave trade. The effects were devastating. Some countries have never recovered. The Central Africa Republic, for example, has just about 5 million people yet it is about three times the size of Uganda.

And whereas Africa by 1900 was still grappling with the problem of tribal sectarianism, the arrival of the coloniser brought a new problem of religious sectarianism.

In Uganda, the Protestant missionaries arrived in 1877 and Catholics in 1879. However, in just 13 years, there was a religious war here, fought by natives!

Africans survived by chance. We survived because of advanced agriculture. Living with chicken, cows, had vaccinated us. We could not easily die. But colonialists tried. In Kenya, they had already established the White Highlands. In South Africa they had taken 73% of the land. It was the same story in Zimbabwe, Mozambique, Angola etc.

When traditional leaders failed to defend us, new players came in. The founding of the Africa National Congress party in 1912 was a significant development. It was a new phase of resistance by educated Africans, grounded in the systems of the West.

This phase of the struggle was boosted by the Imperialist wars, which saw many European countries weakened by the end of the First World War. The rise of Communist Russia that opposed colonialism was also a boost.

State formation in post-independent Africa was even more complicated. For example, some independent states were building armies on religious and tribal basis.

In Uganda, political parties were hinged on religion, no wonder none could get a majority. UPC had to ally with KY, an alliance which collapsed in 1964 and led to the 1966 crisis.

This background is important in understanding the NRM Revolution. In 1965 I was in DP courtesy of my parents. My colleagues like Eriya Kategaya were in UPC. We were getting exposed and we began questioning the politics of identity.

We began raising questions about who would ensure the prosperity of the African people. Is it my tribesmates, those I share holy communion with or those we trade with? We began talking about legitimate interests of the people and formed a third force.

That is how we formed FRONASA in 1971 based on the tenets of Pan Africanism, Social Transformation, Patriotism and Democracy. These are our guiding principles.

We must however realise that we are still engaged in survival. We must ensure that never again must the black man survive because of the mercy of others.

These are the issues the media does not highlight. I ask that the media, besides entertaining, is able to educate and inform their audiences about this survival of the African. No one should have illusions that we shall compromise on our survival. I thank you.